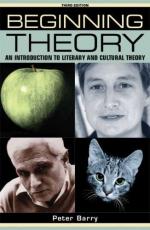 This quiz consists of 5 multiple choice and 5 short answer questions through Theory before theory - liberal humanism.

1. Who does the narrator say was the founder of a method of studying English which is still the norm today?
(a) I.A. Richards.
(b) Samuel Langhorne Clemens.
(c) T.S. Eliot.
(d) Ralph Waldo Emerson.

3. Wordsworth, Coleridge, Keats, and Shelley are authors of what form of writing, according to the chapter titled Theory Before Theory--Liberal Humanism?
(a) Romantic poets.
(b) Mystery fiction writers.
(c) Science-fiction writers.
(d) Investigative journalists.

4. Peter Barry explains that ________'s most significant thinking was contained in the essays "The Function of Criticism at the Present Time" and "The Study of Poetry."
(a) Voltaire.
(b) Mark Twain.
(c) Matthew Arnold.
(d) William Shakespeare.

5. What term is used in the Introduction means not politically radical, and hence generally evasive and non-committal on political issues?
(a) Conservative.
(b) Communists.
(c) Liberal.
(d) Socialists.

1. What where the only two universities in England in the nineteenth century?

2. According to the narrator in the Introduction, what two introductions to theory sources deal with the problems of teaching or learning theory?

3. According to the narrator in the Introduction, the term "liberal humanism" became current in what decade?

4. The Introduction states that another name for traditional literary criticism is ________.

5. According to the chapter titled Theory Before Theory--Liberal Humanism, structuralism and post-structuralism originated in what country?