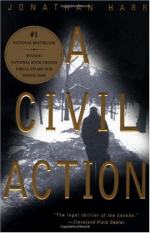 Jonathan Harr
This set of Lesson Plans consists of approximately 114 pages of tests, essay questions, lessons, and other teaching materials.

1. Who is on the Schlictmann negotiating team in New York at Grace Chemical's office?

2. During the misconduct hearings, what information about the tannery does Riley admit he has at home?

3. When Schlictmann meets with his client families in his offices in August, he tells them that the most difficult thing facing the plaintiffs in the upcoming phase 2 trial is the jury asking themselves what question?

4. How much does Schlictmann return to the families for expenses charged?

5. When Schlictmann meets with his client families in his offices in August, which family says "We're all in this together. That's how we started, and that's how we'll stay."?

2. What is Schlictmann's opinion about the Court of Appeals initial ruling?

3. What types of questions does Judge Skinner give the jury during jury instructions?

4. Briefly describe what the Yankee Report.

5. When Schlictmann meets with the families during the negotiations with Grace following the verdict, what is the position of the families?

6. What is the "shark effect" that Eustis is worried about in giving a big settlement to Schlictmann?

7. What is the strategy of the defense during Phase 1 of the trial?

8. How does Schlictmann imagine that he would begin the Phase 2 trial?

10. Does Schlictmann do what he wants to do in his summation to the jury at the end of Phase 1?

Discuss the Phase 1 verdict. Include what it was, the reactions by the lawyers, the parties, and the press. Do you think the verdict is fair?

If the reports and information that came to light after the trial had been available during the trial, would the verdict have been different? Include a discussion of the EPA report, the Yankee Report, the information in the warehouse, etc.

Describe the lawsuit involved in the book. Be sure to include a description of the claim, the plaintiffs, the defendants, etc.