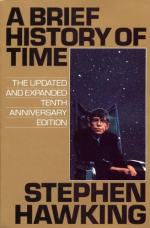 Stephen Hawking
This set of Lesson Plans consists of approximately 113 pages of tests, essay questions, lessons, and other teaching materials.

This quiz consists of 5 multiple choice and 5 short answer questions through Isaac Newton.

1. Who brought forth the idea that the earth and planets revolve around the sun?
(a) Copernicus.
(b) Galileo.
(c) Aristotle.
(d) Ptolemy.

3. A location on earth's surface is defined by what?
(a) Longitude, latitude and altitude.
(b) Location, time and depth.
(c) Altitude, degree and time.
(d) Height, width and depth.

1. An open string is defined as what?

2. Who proposed the idea that there are such things called quanta?

3. Even empty space is filled with what?

4. How many questions are left unanswered prior to the development of math that incorporates quantum mechanics?

5. Einstein proposed who should have control over nuclear weaponry?

More summaries and resources for teaching or studying A Brief History of Time.

A Brief History of Time from BookRags. (c)2022 BookRags, Inc. All rights reserved.