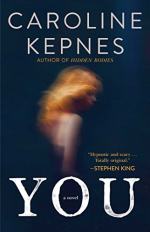 Get You from Amazon.com
View the Study Pack
View the Lesson Plans
Study Guide
Order our You Study Guide

Caroline Kepnes
This Study Guide consists of approximately 58 pages of chapter summaries, quotes, character analysis, themes, and more - everything you need to sharpen your knowledge of You.

You Summary & Study Guide includes comprehensive information and analysis to help you understand the book. This study guide contains the following sections:

This detailed literature summary also contains Quotes and a Free Quiz on You by Caroline Kepnes.

The following version of the novel was used to create this study guide: Kepnes, Caroline. You. Atria/Emily Bestler Books, September 30, 2014. Kindle.

In the novel You by Caroline Kepnes, Joseph “Joe” Goldberg is willing to do anything for the woman he loves — even commit murder. Joe is obsessed with the beautiful Guinevere Beck from the time he first sees her in the bookstore where he works. Unfortunately for Joe, Beck has emotional problems of her own and proves more of a challenge than he anticipated. Joe discovers that Beck has had an affair with her married therapist about the same time that Beck learns Joe has a collection of her things, including copies of her emails, at his apartment. The novel presents a cast of emotionally disturbed people whose interactions with each other can be both hilarious and tragic.

Joe is obsessed with Beck when she first walks into his bookstore. He uses her name to research her online and find where she lives. He spends his days watching her through the windows of her apartment. He believes she is his future. Joe finally gets the opportunity to impress her when he saves her life by pulling her from the subway tracks after she fell while trying to catch her phone.

Joe thinks this will be the beginning of his love affair with Beck and even steals the phone she almost dropped onto the subway tracks so he can monitor the messages she sends to her friends. He wants to know what she is thinking about him and is upset when he learns she is fixated on her ex-boyfriend Benji. Benji did not even attend Beck’s public reading and spent the evening instead with a prostitute. Joe tricks Benji into meeting him at the bookstore and kills him. He thinks that if Benji is out of the picture, Beck will turn to Joe.

Instead, Beck begins calling Joe only when she needs someone to help her with an errand or share lunch. Joe feels as if he is Beck’s gay friend and not her boyfriend. Beck acknowledges a sexual attraction between them when they visit IKEA. However, before they can make love, Beck gets a call from her codependent friend, Peach. Peach demands and gets Beck’s attention. Finally, Joe is tired of taking a backseat to Peach and kills her as well.

There is a short span of time during which Joe dates another girl at the suggestion of his therapist, Nicky. Joe had gone to see this therapist only because he knew that Beck was seeing him as well. Although Joe admitted to himself that his new girlfriend was perfect, he could not make himself love her. He broke up with her and began making plans to kill Nicky, whom he learned was sexually attracted to Beck. Before Joe could go through with this murder, Beck called Joe and said she needed him.

Beck told Joe that Peach’s body had been found. It was believed she had committed suicide. Joe comforted Beck and soon he and Beck were having the sort of relationship Joe wanted. As time went by, Joe noticed there would be periods of time during which Beck would not return his messages immediately or she would make excuses for why she could not see him. One day he arrived at his apartment to see that she had found what he called the Box of Beck, a box full of things he had swiped from her apartment. Beck accused him of being sick and having stalked her. He knocks her unconscious and takes her to the bookstore where he locks her in the cage used to protect rare books.

When Joe visits Beck’s apartment he finds that she has been having an affair with Nicky. Joe confronts Beck in the cage, trying to get her to say that she loves him and not Nicky. Beck finally plays along with Joe and seduces him into trusting her and unlocking the cage. She tries to run, but he catches her and kills her. Joe buries her body near property owned by Nicky. At the end of the novel a new girl, Amy Adam, walks into the bookstore. Joe becomes obsessed with her just as he was obsessed with Beck.

More summaries and resources for teaching or studying You.

You from BookRags. (c)2022 BookRags, Inc. All rights reserved.