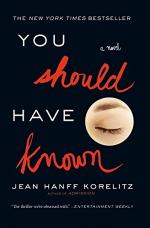 Related Topics
The Devil and Webster
The Plot
The Latecomer

You Should Have Known Summary & Study Guide

Jean Hanff Korelitz
This Study Guide consists of approximately 68 pages of chapter summaries, quotes, character analysis, themes, and more - everything you need to sharpen your knowledge of You Should Have Known.

You Should Have Known Summary & Study Guide Description

You Should Have Known Summary & Study Guide includes comprehensive information and analysis to help you understand the book. This study guide contains the following sections:

This detailed literature summary also contains Quotes and a Free Quiz on You Should Have Known by Jean Hanff Korelitz.

The following version of the novel was used to create this study guide: Korelitz, Jean Hanff. You Should Have Known. New York: Grand Central Publishing, 2014.

The novel, You Should Have Known by Jean Hanff Korelitz, is a beautiful example of how life can go on, even after tragedy and unforeseen circumstances has turned things upside down. Therapist Grace Reinhart Sachs believed she had the perfect marriage with her husband, Jonathan Sachs, a pediatric oncologist. Grace lived in the same apartment in which she had grown up and sent her son to the same private school she attended as a child. Grace was on the cusp of publishing a book advising women to listen to what perspective spouses said. She believed women could avoid future problems by not marrying the wrong man. Grace, however, did not follow her own advice and realized too late that her husband was not the person she believed him to be.

The novel opens with Grace in her office being interviewed by a representative from Vogue magazine about her book You Should Have Known: Why Women Fail to Hear What the Men in Their Lives Are Telling Them. The book was a hard hitting self-help manual instructing women to find the right man in order to avoid problems later. Grace was a therapist who believed her clients needed to take responsibility for the mistakes they made and learn from those mistakes.

Because her son attended Rearden Academy, Grace assisted with the yearly fundraising auction. Grace and the other women were surprised when Malaga Alves, the mother of a son on scholarship at Rearden, attended both a planning session and the auction. Malaga pointed out that her baby had long eyelashes, just like Henry, Grace’s son, had long eyelashes. The night of the auction, Grace was told that Malaga was looking for her. Grace had seen Malaga leaving the auction, holding her auction book in front of her face as if she were hiding from Grace.

Life changed for Grace on the day that she received a message from the school indicating that there had been a tragedy in the family of one of the fourth grade students. Grace learned from Sylvia that Malaga had been murdered but as the day progressed, she was more worried about the fact that she could not locate Jonathan. Grace left multiple messages for her husband but he did not return them. When Grace arrived at her apartment building, there were police detectives waiting to talk to her. They suggested that she should know Malaga and that she should not protect him. That night, Grace discovered Jonathan’s phone was hidden in his bedside table.

The following day, Grace happened to meet one of Jonathan’s co-workers from the hospital. She was shocked when the co-worker indicated Jonathan was no longer an employee there. Later that evening, Grace was interviewed by police again. She began to understand more about what the police believed her husband had done. At home, she searched the house looking for things that did not belong. She found a condom in the pocket of one of Jonathan’s coats, a form of birth control that she and Jonathan had never used. What was more telling to Grace was the things that she did not find in the apartment she shared with her husband, like her mother’s jewelry and Jonathan’s clothes.

After Grace left Henry at school the following day, her friend Sylvia warned Grace that she needed to take Henry and leave the city until all of the frenzy about Jonathan and his alleged murder of Malaga died down. Grace took Henry to the summer house she owned in Connecticut. Once Henry was back in school, Grace allowed herself to fall apart. She did not believe that she would ever work as a counselor again. Grace believed that because she had made mistakes, no one would want her to advise them how to fix their marriages.

Grace began to renew her confidence in herself when she reunited with her childhood friend, Vita. Vita told Grace that the advice she gave in her book was still advice that women needed to hear. Grace next heard from her agent at the publishing company who told Grace that they still wanted to publish the book and thought it might even reach more women after what had happened with Jonathan.

Grace was impressed by Mitchell’s decision to adopt the baby that Malaga had as a result of her affair with Jonathan. Malaga’s husband had refused to care for the girl because she was not his. Despite the tragedy that Jonathan had caused them, Mitchell and his parents decided turn the situation around by taking in the girl. Later, Grace was given the opportunity to turn her situation around when one of the detectives who investigated Malaga’s murder asked her if she would consider donating the things from her apartment to a family in need. He explained one of the boys had gotten into trouble because he had picked the wrong friends, but that the boy was a good kid and the family deserved any help it could get. Grace noted the similarities in the situation and agreed to give the family whatever they needed. The novel ends with the detective apologizing to Grace, telling her they knew from the beginning she was not involved in Jonathan’s crimes.

More summaries and resources for teaching or studying You Should Have Known.

You Should Have Known from BookRags. (c)2022 BookRags, Inc. All rights reserved.