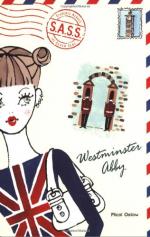 Micol Ostow
This Study Guide consists of approximately 21 pages of chapter summaries, quotes, character analysis, themes, and more - everything you need to sharpen your knowledge of Westminster Abby.

"Westminster Abby" begins as Abby Capshaw is sitting in her seat on a flight to London. She is going to spend the summer in the Students Across the Seven Seas (SASS) program. She is excited to have time away from her parents, who are overprotective and restrictive. Abby's parents are sending her to London to get her away from a boy she has been interested in, but it turns out that before the trip, Abby finds out that the boy has another girl on the side. So Abby arrives in London nervous about having new experiences on her own, and also anxious to have new experiences to put heartbreak behind her. On her first morning, Abby meets Zoe, a punk rocker with green hair and a pierced tongue. Zoe takes Abby under her wing, and the two friends travel around London with other students from the SASS program. At a pub—where Abby is not drinking anything alcoholic—she meets Ian, a friendly and interested Brit. Zoe encourages her to talk to him,and soon enough, she finds herself at his house, where he has offered to cook for her. In a short time, Ian invites her to visit his parnets in Manchester, and Abby lies to her parents about her trip. As soon as she returns to London, Abby finds James, who has used the ticket she bought for him. He wants to apologize and win her back, and Abby goes to Dublin with him, because she wants to see who she is with him. They have a good time there, and they kiss a few times, but in the end, Abby feels that James has lost her trust once, and while she will be friends with him, she has also found Ian, and she wants to see who she is in other places than in James' arms. Abby confesses to her parents that she had lied about her travels to Manchester and Dublin, and her parents are not that angry, because they have just gotten a glowing report from Reuben, the chaperone for the SASS program. In the end, Abby agrees not to lie to her parents, and they agree to give her more freedom and independence. Abby does not jump into Ian's arms, but she does end the book at a dance club, where she is glad that her life has Ian in it.

More summaries and resources for teaching or studying Westminster Abby.