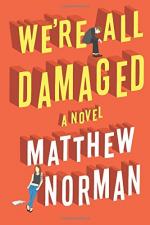 Matthew Norman
This Study Guide consists of approximately 62 pages of chapter summaries, quotes, character analysis, themes, and more - everything you need to sharpen your knowledge of We're All Damaged.

This detailed literature summary also contains Quotes and a Free Quiz on We're All Damaged by Matthew Norman.

A year after Andy was left by his wife, he is still trying to cope with the pain. He has moved to New York to be a bartender. While sitting in a bar waiting for a blind date that his friend Byron set up, Andy is called back to Omaha by his mother to spend some time with his dying grandfather before the funeral. Andy is not too sure about heading home, but since his mother has made all of the arrangements for him, he does not have much of a choice. His return to Omaha means that he must confront his past.

From the moment he lands, Andy has an ominous feeling about being home. His brother picks him up from the airport, and it becomes apparent that most of his relationships are awkward and tense. A year after being gone, his brother finds it more important to take a business phone call than to talk to his brother.

Once Andy gets to his parents’ house, things do not get better. The awkwardness continues when he meets the neighborhood security guard Don Johnson, then finds his father in the back yard shooting squirrels with a paintball gun. After talking about his flight, the fact that his hair is longer and Andy noticing that his father has a beard, he and his father have nothing else to talk about.

The situation gets even more awkward when Andy discovers three men from the Glitter Mafia have been vandalizing his parents’ front yard because of his mother’s conservative beliefs on same-sex marriage and the fact that she expresses her opinion on her radio talk show, Dr. Nancy Knows, and has interest from Fox News to be a panelist on one of their shows.

Andy visits his grandfather at the hospice wing of the home, New Beginnings, but with a tube down his throat, Henry cannot talk. He attempts to write, but the task exhausts him.

Before leaving New York, Andy promised his friend and supervisor that he would stay away from his ex, but he does not. One night, he takes his grandfather’s Caddie to Dairy Queen and gets a grape Mr. Misty, and then goes and sits in the new patio furniture at the house that used to be his. He imagines being with Karen once again and realizes how much he misses her. When he is confronted by the new boyfriend—the paramedic Karen had an affair with—he throws his drink at the house and kicks the head off a Nebraska lawn gnome.

Andy meets Daisy, who claims to be a friend of Andy, and despite not knowing her very well, finds someone he can talk to and confide in. He is aware that she is keeping secrets from him, but he is intrigued by her. She exclaims that her mission is to bring Andy back to the living. She finds way to restructure his life, from making him buy a t-shirt that is one size too small with a cartoon cowboy riding a corn cob to helping him recreate the last perfect moment with Karen to helping Karen become jealous by pretending to be his girlfriend.

In addition to Daisy helping him come back to life, Andy rekindles his friendship with Neal, Karen’s twin brother and his friend from high school. Despite the positive steps Andy makes in his life to get over his pain, there are other issues he must deal with, including his parents’ troubled marriage, which has driven his father to have an affair, and a group of paintball-colored squirrels who are out for revenge.

The book concludes with Andy returning to New York to bartend broken and bruised—physically this time instead of emotionally. While he was unable to solve all of his problems or those of his family, he was able to put them in perspective and move forward with his life. The blind date he was supposed to have early on in the book even shows up, and Andy and Katie go to the roof to see the Empire State Building lit up in rainbow colors to celebrate the Supreme Court legalizing same-sex marriage.

More summaries and resources for teaching or studying We're All Damaged.