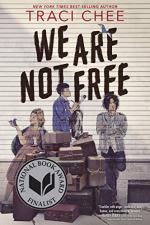 We Are Not Free Summary & Study Guide

Traci Chee
This Study Guide consists of approximately 118 pages of chapter summaries, quotes, character analysis, themes, and more - everything you need to sharpen your knowledge of We Are Not Free.

We Are Not Free Summary & Study Guide Description

We Are Not Free Summary & Study Guide includes comprehensive information and analysis to help you understand the book. This study guide contains the following sections:

This detailed literature summary also contains Quotes and a Free Quiz on We Are Not Free by Traci Chee.

The following version was used to make this guide: Chee, Traci. We Are Not Free. New York, New York: Houghton Mifflin Harcourt, 2020. This young adult historical fiction novel has 16 chapters, and for the purposes of this guide will be broken into nine sections, most of which will cover two chapters, or roughly 30-50 pages.

The novel begins with a character list titled "A Registry," then two pages of newsprint declaring war. Chapter I is told from Minnow’s perspective, in March 1942, starting with him at school sketching the Golden Gate bridge. On his walk home he is assaulted by some white boys, but his brothers and their friends save him. Chapter II is told from Shig’s perspective as they all start receiving evacuation notices. They are given a few days to pack up and prepare for the internment camps. Chapter II ends as they arrive at Tanforan detention center.

Chapter III is told from Yum-Yum’s perspective as she, her brother Fred, and her sick mother settle into their new home (a horse stall) in Tanforan. She struggles with managing her brother as her mother has to go to the hospital. At night she rebels by going out with her friends, and one night she is out all night kissing her boyfriend Shig. When she gets home, Fred is gone, but she finds him on their mother’s hospital bed. Chapter IV is Hiromi or Bette’s chapter, as everyone moves from Tanforan to Topaz, Utah. On the train she meets Joe Tanaka and instantly crushes on him. She and Joe grow close, and Bette fantasizes about the upcoming Christmas dance. At the dance, Bette finds Joe outside kissing a blond white girl. She weeps in Frankie’s arms but eventually goes back into the party.

Chapter V is told from Frankie’s angry perspective, now from January-February 1943. The military is trying to recruit them to serve. Everyone over 17 is forced to fill out a loyalty questionnaire. Frankie is always getting into fights, but Mas tells him he has to find something to fight for. Mas signs up to go to war, and Frankie does too. Chapter VI is told from Stan’s perspective. Stan writes six colleges to ask for applications, and gets five pre-rejection letters. The camp buzzes about the questionnaire and it becomes clear people either have to answer yes or no to both questions 27 and 28 - will you volunteer in the army and are you loyal. Yes to both - you are loyal, no to both - you are not. Stan finally gets an application for college, but that night Mr. Uyeda, who is outside playing with his dog, is shot by a guard and it makes him reconsider his loyalty to the United States.

Chapter VII is Aiko’s chapter in the months following the shooting of Mr. Uyeda. Tensions are high, and because of the questionnaire people divide into Yes-Yeses or No-Nos. Shig throws a party for Mas, Twitchy, and Frankie who leave for basic training, and Bette decides to move to New York. All the No-Nos are moved to Tule Lake, California. Chapter VIII is Yuki’s perspective - she is a Yes-Yes still in Topaz, and the girls softball team plays an away game in the community and wins. They stop to get ice cream, but the grocery store clerk refuses to serve them shouting, “WE DON’T SERVE JAPS HERE!” (169).

Chapter IX is told from Mary’s dour perspective as she and her family have been moved to Tule Lake. Life is much harder now, and she fights with her dad constantly. Fights and rebellions break out at camp. Chapter X is told from Kiyoshi’s perspective, as the police arbitrarily beat up and arrest the internees. One night Stan is arrested without reason, and Kiyoshi feels guilty for not doing anything. A few nights later, the police come and arrest Kiyoshi. They are brutalized, and one day they put the most revered prisoner in the solitary outdoor cell, but Kiyoshi volunteers to go with him, as all the other prisoners step up with Kiyoshi.

Chapter XI is told from Mas’s perspective, in the form of letters he writes to his deceased father from Camp Shelby, Mississippi where he is for basic training now in early 1944. He writes about their training, and their treatment. He writes about his father’s flag, and racism in America. Chapter XII is told from Keiko’s perspective on the night before Twitchy is deployed. They crash a wedding party, then she and Twitchy spend the night together in a guard tower, before saying goodbye.

Chapter XIII is told from Twitchy’s perspective as he arrives in Italy with the Japanese 442nd Regimental Combat team and experiences war for the first time. They make their way through Italy, then are sent to France where the fighting gets harder. The regiment takes a difficult hill, yelling Banzai together as the bullets fly around them, and Twitchy is shot and killed.

Chapter XIV is told from everyone’s collective perspective as they all learn the news of Twitchy’s death. They all feel broken, and Aiko starts folding paper cranes. Chapter XV is told from Tommy’s perspective still in Tule Lake written in verse, now in December 1944. Hokoku has taken over the camp. His parents pressure him about going back to Japan. He and Stan decide to stay in the U.S.

Chapter XVI is told from Minnow’s perspective, in spring 1945, now back in San Francisco. He and his mother search for an apartment in their old neighborhood but struggle with racist landlords. Shig moves back from Chicago, and Stan comes back to help find a new place for his family. They eventually move in with Yum-Yum’s father, and Minnow re-enrolls in high school to finish the final semester. The second-to-last page is Minnow’s sketch of all the Japantown boys on Mr. Hidekawa’s stoop, with Minnow’s dedication to Twitchy. The final page of the novel is an image of a single origami crane flying.

More summaries and resources for teaching or studying We Are Not Free.

We Are Not Free from BookRags. (c)2022 BookRags, Inc. All rights reserved.