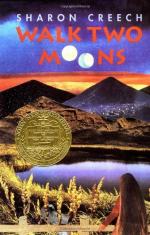 Sharon Creech
This Study Guide consists of approximately 40 pages of chapter summaries, quotes, character analysis, themes, and more - everything you need to sharpen your knowledge of Walk Two Moons.

In Walk Two Moons by Sharon Creech, Sal Hiddle is thirteen when she and her father move from the home Sal loves in Bybanks, Kentucky, to a small house in the town of Euclid, Ohio. They move so that Sal’s father John can be closer to a red-haired woman named Margaret. Sal believes her father is romantically involved with Margaret, but she later discovers that is not the case.

Sal is the only child of John and Sugar. One April morning, Sugar announces that she’s going on a trip alone. She is apparently struggling with personal issues, including the fact that she is unable to have more children, and the journey seems to be one of self-discovery. Sugar is in Idaho when the bus she is riding runs off a cliff, killing everyone on board except Margaret. John visits Margaret in the hospital when he goes to Idaho to tend to Sugar’s burial and discovers Margaret was seated next to Sugar when the wreck occurred. It’s because John feels a connection to Sugar that he moves with Sal to Ohio.

Once in Ohio, Sal becomes friends with a girl in her class named Phoebe Winterbottom. Phoebe lives with her older sister and her parents in Margaret’s neighborhood. Soon after the friendship between Phoebe and Sal becomes solid, Phoebe’s mother disappears. Sal commiserates with Phoebe’s loss, having suffered when Sugar left home. Phoebe’s mother is gone only a few days when she returns with the grown son she’d given up for adoption. Phoebe’s story has a happy ending, a stark contrast to Sal’s own story.

Soon after Phoebe’s situation is resolved, Sal’s paternal grandparents, Gram and Gramps Hiddle, arrive to take her to Idaho. They plan their trip to stop at the places Sugar had visited and intend to arrive at Sugar’s grave on her birthday. As they set out on their trip, Gram and Gramps suggest Sal entertain them by telling a story. She begins the story of her friendship with Phoebe, intertwining her own memories along the way. Pieces of Phoebe’s story prompt memories of Sal’s life and she pours it all out to her grandparents. Meanwhile, Sal and her grandparents have some adventures of their own. Gram is snake bit while swimming and they spend a couple of days in a hospital. As they continue their trip, Gram becomes increasingly ill and the trip is halted when she becomes so sick that she has to be hospitalized again. Gramps, realizing that it’s important to Sal to reach her mother’s grave on Sugar’s birthday, hands over the keys to the car and Sal sets out on the last few hours of the journey alone.

She reaches the spot where the bus went off the cliff and, though she still doesn’t really understand the reason for Sugar’s trip, comes to terms with her life. She is picked up by the police but upon hearing her story, simply drive her back to the hospital and return the car to Gramps. There, Sal discovers that Gram has died.

The stay in Ohio is fairly brief and Sal returns to her beloved farm in Bybanks, Kentucky, with her father. They are joined by Gramps.