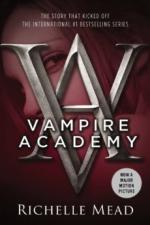 Richelle Mead
This Study Guide consists of approximately 42 pages of chapter summaries, quotes, character analysis, themes, and more - everything you need to sharpen your knowledge of Vampire Academy.

This detailed literature summary also contains Topics for Discussion and a Free Quiz on Vampire Academy by Richelle Mead.

The novel Vampire Academy tells the story of Lissa, a Moroi vampire princess with special healing and mental powers, and her protector, Rose, a dhampir half-vampire who is psychically bound with her best friend Lissa. The two flee their secret vampire school to protect Lissa and when they return, they must navigate the cliques, infighting, and rumors of their classmates, as well as battle the depression and despair that's a side effect of Lissa's powers. On top of that, the two must defeat a secret enemy: a royal vampire secretly plotting to kidnap Lissa to use her healing for his own selfish ends.

The novel begins with Lissa and Rose, who fled the vampire academy two years previously, being caught in Portland by guardians (dhampirs who guard the Moroi) and brought back to the academy in rural Montana. The guardian team is lead by a new guardian at the school, Dimitri. At the school, the headmistress scolds the girls for running away and confines Rose to her room. The girls keep secret their real reasons for running away.

At school, Rose and Lissa try to lay low, hanging out with Lissa's unpopular cousin Natalie, while Rose trains with her attractive instructor Dimitri. Still, they become involved in a war of rumors with Mia, who dislikes Lissa because Lissa's dead brother Andre once slept with her and then dumped her. Mia is now dating Lissa's ex-boyfriend and hanging out with the royal crowd. Meanwhile, Lissa starts finding dead animals and birds left for her by some secret enemy. As the novel progresses, the reader learns that Lissa's family was killed in a car accident. Rose was also killed, but Lissa used her healing power to bring Rose back to life. Later, Lissa also healed a dead raven. The girls ran away because of the dangers of Lissa's new powers.

The rumor war escalates as Mia gets two Moroi boys to say that Rose slept with them and let them bite her. Lissa begins using her compulsion powers to sway the popular opinion in their favor, hanging out with the royal clique. The price is that she becomes more and more depressed, and she drives a wedge between herself and the boy he is attracted to, Christian, who is disliked at school because his parents became evil Strigoi vampires and then were killed.

Events come to a head when Lissa uses her healing powers to heal Rose's broken leg. Lissa is kidnapped by Natalie's father, Victor, a vampire suffering from a chronic disease. Natalie left the dead animals, to see if Lissa would heal them, confirming her powers. He wants to hold Lissa captive, so she can heal his chronic disease, letting him vie for power among the noble vampires. Rose, through her psychic bond with Lissa, is able to lead the guardians to her, and she, Christian, and Dimitri save her friend. However, while Victor is in jail, Natalie turns herself into a Strigoi vampire by killing a teacher, in order to free her father. Dimitri kills her and later Victor is caught again.

More summaries and resources for teaching or studying Vampire Academy.