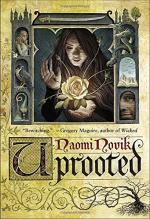 Naomi Novik
This Study Guide consists of approximately 65 pages of chapter summaries, quotes, character analysis, themes, and more - everything you need to sharpen your knowledge of Uprooted.

This detailed literature summary also contains Quotes and a Free Quiz on Uprooted: A Novel by Naomi Novik.

Agnieszka is a 17-year-old girl who lives in the village of Dvernik under the rule of wizard Sarkan, known as the Dragon. Every ten years, Sarkan chooses a girl from the region who will live with him for a decade. Then, the next choosing occurs. No one knows what happens to the girls, or what duties they are expected to perform, but none of them remain in the village once they are released. Agnieszka and everyone else in the region fully expects Sarkan to choose Kasia, Agnieszka's best friend. Kasia is everything Agnieszka is not – brave, elegant, and skilled – partly because her mother is among those who believe Kasia will be chosen and has prepared her for the role her entire life. On the day of the choosing, Agnieszka is heartbroken at the thought of losing Kasia but also feels a secret relief that she has never had to fear the choosing day. However, Sarkan takes a look at all the girls of the correct age and chooses Agnieszka. He whisks her away to his tower before she has a chance to think about what has happened or even say good-bye.

Agnieszka is afraid of her new role and resentful of this change in her life. She is bitterly homesick and is surprised when Sarkan reveals her powers. She refuses to let him teach her and is barely civil as she goes about her work. From notes left by a previous girl, she learns that others did not have her magical power. One day Sarkan is called away and Agnieszka is alone when she receives word that her village is in danger. Dvernik is the village closest to the Wood, where everyone recognizes an evil, magical presence that even Sarkan's power can barely keep at bay. Agnieszka answers the call and realizes that she should have been taking Sarkan's magical lessons more seriously.

Within a short time, Agnieszka and Sarkan realize that the Wood has taken on a new level of power. Agnieszka exhibits her abilities, which are different from Sarkan's but equally powerful. Together, they rescue Kasia from the Wood. When Prince Merek of the kingdom learns about this miraculous rescue, he forces them to rescue his mother, Queen Hannah. It seems the rescue is successful, but Queen Hannah is not herself, and she soon creates situations that kill all the adults of the royal family along with 6,000 soldiers. When the battle is over, Agnieszka and Sarkan realize they have to go into the Wood and bring an end to the situation if they want the kingdom to ever be truly free.

Once in the Wood, they face the monsters that have been created by the Wood-Queen, a woman who was a member of the people who lived in the land long before Agnieszka's people and who had manifested herself in Queen Hannah's body. They clashed with Agnieszka's people and most chose to become trees in the Wood. But the Wood-Queen, who had been treated horribly in life, allowed anger to consume her to the point that she had corrupted everything in the Wood. Agnieszka and Sarkan initially try to destroy her, but Agnieszka comes to realize that she needs to help her make the transition to a tree state, and to understand that nothing is meant to last forever – including the trees.

With peace restored to the Wood, Sarkan flees to the capital city. He claims that he is needed to set the city back right, eliminating the corruption and ensuring the safety of the child who will be crowned the new king. Agnieszka realizes that he is trying to avoid the pull of the land. Everyone who grows up in the valley feels an affinity to the land, and no one wants to leave. The young girls whom Sarkan kept in his tower spent a decade away from the land and finally lost that affinity. Agnieszka has not lost her connection. She chooses to remain. She sets out to heal the Wood, saving some souls the Wood-Queen trapped in trees and burning other trees so the souls would no longer be tormented. Gradually, the Wood began to heal and the people in the nearby villages began to accept Agnieszka's presence. One night, everyone gathers for a festival, and Sarkan appears. He wants to keep his distance from Agnieszka, but the attraction they have felt for so long is too strong to deny.

More summaries and resources for teaching or studying Uprooted: A Novel.