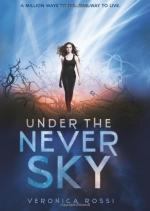 Veronica Rossi
This Study Guide consists of approximately 54 pages of chapter summaries, quotes, character analysis, themes, and more - everything you need to sharpen your knowledge of Under the Never Sky.

Under the Never Sky Summary & Study Guide includes comprehensive information and analysis to help you understand the book. This study guide contains the following sections:

This detailed literature summary also contains Topics for Discussion on Under the Never Sky by Veronica Rossi.

"Under the Never Sky" by Veronica Rossi is a futuristic look at a world in which the population is divided between those who live in Pods, and those who survive under the sky. It is a story in which world is plagued with air that is seething with electrically charged storms charring any place where they meet land. As a result, a large portion of the population chose to live in self contained city sized Pods.

In the Pods, the populations use technology to escape their confined environment. By creating 'Realms' that span the course of history, the future, and any destination that can be imagined, those who dwell within the Pods manage to stimulate themselves with a rich and diverse environment. These Realms are accessed by way of a 'Smarteye' which is part bionics and part electronics. It attaches itself over one eye, acting as both a regular eye, and an eye into the Realm of their choice. Called 'fracturing', this method of being in two places at one time is how they cope.Aria lives in this world, and while her actual contact to human beings is limited, she lives an active virtual life. A genetically engineered child (as all are in the Pods) Aria was given the voice of a Falcon Soprano. She can sing like an angel, and every Sunday she meets her mother in the Opera Hall to sing for her. It is the one time in each week where she has her mother's undivided attention. The most recent time that her mother came to her for a song, she told her that she had to leave. Her work would take her to the Bliss Pod and she had to leave early, so she'd come hoping for one last song in person. It was to be the last time she would see her mother. When radio contact with Bliss is lost, Aria tries to get information from Consul Hess's son Soren, but Soren is suffering from a condition that is affecting an increasing number of people in the Pods. It is also the focus of Lumina's work at Bliss. Called DLS or Degenerative Limbic System, it removes inhibitions, causing the sufferer to confuse pain with pleasure and anger with happiness. It causes reckless behavioral breakdowns. When Aria is kicked out of her Pod, and left to die in the real world, she suffers contact shock. She sees much of the world for the very first time.

In a strange coincidence, an Outsider from the Tides tribe called Peregrine happens to be close enough to help Aria. Though as a rule he would have as much use for her - a Mole - as she would for him - a Savage, but they are forced into a alliance of cooperation. Aria will act as intermediary to locating Talon, Peregrine's nephew, and in return, Peregrine will see her safely through the unclaimed lands. He keeps his word, saving her from all dangers and she keeps hers, helping him to contact Talon, but neither of them gets what they want and both see the world through different eyes.

More summaries and resources for teaching or studying Under the Never Sky.

Under the Never Sky from BookRags. (c)2022 BookRags, Inc. All rights reserved.