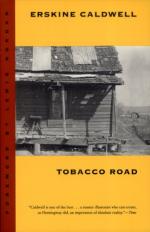 Erskine Caldwell
This Study Guide consists of approximately 26 pages of chapter summaries, quotes, character analysis, themes, and more - everything you need to sharpen your knowledge of Tobacco Road.

This detailed literature summary also contains Topics for Discussion and a Free Quiz on Tobacco Road by Erskine Caldwell.

Tobacco Road is a novel by acclaimed writer Erskine Caldwell. Tobacco Road is the story of one family's inability to move on when life does not go as planned. Jeeter Lester has always worked the land on which his grandfather once farmed tobacco; however, debts have turned Jeeter into a sharecropper on land that the owner no longer wants to farm. Jeeter vows every year that he will find a way to buy the seed and fertilizer needed to farm the land, but every year he finds excuses not to do the work until too much time passes and planting would be futile. Tobacco Road is a story of futility, of giving up, a story that will either inspire the reader to work that much harder or continue to give up in the face of adversity.

Lov Bensey is walking home from town where he had gone to buy a sack of turnips that will feed him and his wife for weeks. However, Lov decides to stop at the farm of his father-in-law to discuss his wife's behavior, knowing full well that the Lesters will try to steal the turnips. Lov tells his father-in-law that Pearl, his wife, will not sleep in his bed with him. Lov wants Jeeter to talk to Pearl. However, Jeeter is so set on getting some of Lov's turnips that he will not even offer advice. During their conversation, Lov notices Ellie May, Jeeter's other daughter, flirting with him from behind a tree. Soon Lov becomes so entranced with Ellie May that he forgets to protect his turnips. Jeeter steals the turnips and runs away.

The following day Sister Bessie announces to the Lesters that she wants to marry Dude and that God has instructed her that she and Dude should begin a ministry by driving around the country, spreading the word. Sister Bessie tells them her husband left her eight-hundred dollars and that she is going into town to use that money to buy a car. Dude goes with her. After they buy the car, Sister Bessie stops by the courthouse and talks the clerk into giving her a marriage license for her to marry Dude. Back at the Lester farm, Bessie performs the ceremony and encourages Dude to consummate the marriage.

Dude and Sister Bessie spend the day driving around in the new car. When they return to the Lester farm, the car is damaged. Dude tells them that a wagon was going too slowly on the road in front of them and they slammed into it, killing the black man driving the wagon; however, the accident was the black man's fault anyway. That night, Dude and Sister Bessie stay with the Lester in their small, two room house. When Sister Bessie goes to bed, she cannot find Dude. She and Jeeter search and finally find him in bed with the old grandmother.

The next day, Jeeter talks Sister Bessie and Dude into taking him to Augusta to sell some firewood. They struggle during the trip to get there because they forgot to put oil in the car and they have damaged the engine. Once in Augusta, they cannot find anyone to buy the wood and end up selling the car's spare tire for extra cash. It becomes late, so they decide to stay in a hotel. Sister Bessie is pulled from the room and offered other places to sleep, finding herself sharing beds with several other men.

The following morning, they once again try to sell the wood but still cannot find any takers. Jeeter becomes angry and decides to burn the wood by the side of the road, but he cannot get it to burn. Once back at the farm, Jeeter argues with Sister Bessie over her decision not to take him to visit his son, Tom. When Jeeter learns that Tom refused to help his parents financially, Jeeter again argues with Sister Bessie and Dude. The argument escalates into a physical fight. Sister Bessie and Dude drive off, but as they do, they run over the old grandmother.

That night, after burying the old grandmother, Jeeter decides to burn the fields to prepare them for planting even though he does not have any money to buy seed. The fire burns away from the house, so Jeeter decides to go to bed. However, during the night the fire turns back toward the house and burns it down around Jeeter and his wife, Ada. Lov and Dude bury Jeeter and Ada the following day. Dude thinks maybe he might find a way to plant the fields.