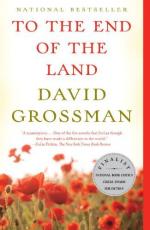 Related Topics
A Horse Walks Into a Bar

To the End of the Land Summary & Study Guide

David Grossman
This Study Guide consists of approximately 45 pages of chapter summaries, quotes, character analysis, themes, and more - everything you need to sharpen your knowledge of To the End of the Land.

To the End of the Land Summary & Study Guide Description

To the End of the Land Summary & Study Guide includes comprehensive information and analysis to help you understand the book. This study guide contains the following sections:

This detailed literature summary also contains Topics for Discussion and a Free Quiz on To the End of the Land by David Grossman.

To the End of the Land by David Grossman is a novel about the way the constant wars in the Middle East affect the people subjected to them. When her son Ofer is summoned to an army operation instead of receiving his release as was expected, Ora decides to still go on their planned journey to Galilee, only she is joined by Avram, Ofer's biological father, instead of her son. She spends the journey telling Avram about their son who he has refused to meet. To the End of the Land is a very difficult novel to read but is quite interesting overall.

Ora meets Avram and Ilan at the age of sixteen while they are all hospitalized in 1967. She is attracted to Ilan while Avram falls in love with Ora. In 2000, Ora hires a cab to drive her son, Ofer, to a meeting place in Gilboa for a military campaign. She does not consider the insensitivity of hiring an Arab, Sami, to make the journey until after the fact. At home, Ora worries about receiving notice of Ofer's death, and in order to thwart the military's procedure, she decides to escape this event by pursuing her journey to Galilee that she had planned to take with Ofer. When Avram, Ofer's biological father, phones to ask if Ofer has been released, Ora offers to visit him, deciding to convince him to accompany her on her journey.

Avram wakes in a field to learn Ora kidnapped him and forced him to join her to Galilee. As they walk, Ora claims that she needs to talk about Ofer because it will keep him safe, but Avram refuses to hear about the son he has never met. Eventually, Avram agrees to listen to Ora talk about their son, warning her to start at a distance. Ora begins by talking about her older son, Adam, and her relationship with her husband, Ilan. She continues with anecdotes about Adam and Ofer's childhoods and how they are best friends. Ora believes Ofer will be safe as long as she talks about him.

As they walk along the path through Galilee toward Jerusalem, Ora and Avram recall their previous romance, her marital issues with Ilan, Avram's friendship with Ilan, and the time Avram spent as a prisoner of war at the hands of the Egyptians. Avram admits that he likes Ofer as he learns more about his son from Ora. After they make love, Ora tells Avram about Ilan searching for him during the war. She is jealous of the possibility of Avram having another child when she listens to his messages and learns his girlfriend, Neta, had a pregnancy scare that turned out to be a false alarm; however, Avram assures Ora that Ofer is his only child and that Avram and Ora will always be together. Suddenly, Ora and Avram feel that Ofer is in danger, and Ora begs Avram to help her hold Ofer together, even as she worries she is shortening Ofer's life by talking to Avram about it instead of insuring Ofer's safety as she originally believed. After making Avram promise that he will remember everything about Ora, Avram, Ilan, Adam and Ofer, Ora pulls away from him, lies on the ground and stares vacantly.

More summaries and resources for teaching or studying To the End of the Land.

To the End of the Land from BookRags. (c)2022 BookRags, Inc. All rights reserved.