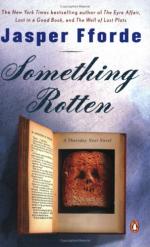 Thursday Next in Something Rotten: A Novel Setting & Symbolism

Jasper Fforde
This Study Guide consists of approximately 35 pages of chapter summaries, quotes, character analysis, themes, and more - everything you need to sharpen your knowledge of Thursday Next in Something Rotten.

Swindon is where Thursday's mother lives and where most of the story takes place.

Book World is a parallel universe occupied by fictional characters and a few humans that know how to enter it.

The service station is where the souls of dead people are staged before crossing a river into absolute death.

The Neanderthal Nation is a village of cloned Neanderthals that the Goliath Corporation had made in the hope of creating soldiers.

The Goliath Corporate Headquarters is an extremely tall building where the corporation oversees its vast operations.

The Goliath Corporation Apologarium is where citizens go to receive formal apologies from the corporation for its brutal activities before it became a faith-based organization.

Nebraska is the setting of the opening chapter in which Thursday seeks a rogue Minotaur that attacks her with...

More summaries and resources for teaching or studying Thursday Next in Something Rotten: A Novel.

Thursday Next in Something Rotten: A Novel from BookRags. (c)2022 BookRags, Inc. All rights reserved.