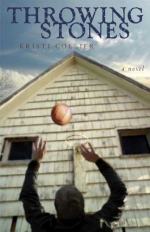 Kristi Collier
This Study Guide consists of approximately 20 pages of chapter summaries, quotes, character analysis, themes, and more - everything you need to sharpen your knowledge of Throwing Stones.

Throwing Stones is a novel by Kristi Collier. Set during the prohibition era, Throwing Stones is about Andrew Soaring, a high school freshman whose brother died while fighting in World War I. Andrew wants to be a star basketball player in order to follow in the huge steps his brother left behind. However, when a new kid comes to town and begins to steal Andrew's star power, Andrew finds himself forced to choose between his own ambition and doing the right thing. Throwing Stones is a fascinating story of one boy's journey to maturity that will inspire readers of all ages.

Andrew Soaring cannot wait for school to start. This year Andrew will finally be in high school and eligible to play for the basketball team. Andrew hopes to be a starter so that he can repeat the wild success his brother, Pete, showed during his years with the basketball team. When Pete leaves to join the military during World War I, he gives Andrew his basketball and told him to practice hard. When Pete dies, Andrew promises himself he would be the best basketball player ever to make Pete proud.

Before school starts, Bennie Esposito comes to town. Bennie is the son of the owner of a carnival. Many people in town look down on Bennie because of his father's profession. Bennie tries to befriend Andrew, but when Bennie shows interest in AnnaLise, the girl Andrew likes, Andrew begins to dislike Bennie. When Andrew breaks his arm and Bennie takes his place on the basketball team, Andrew really begins to dislike Bennie.

Andrew begins to write for the local paper, covering the basketball games, but his stories are often slanted to reflect his annoyance with Bennie. When Andrew's arm mends and he is able to rejoin the team, he finds himself pushed to a more supportive role, unable to make the great plays he had made before. This increase Andrew's resentment towards Bennie.

One night Andrew sneaks up to Bennie's house in an attempt to prove that Bennie and his aunt are bootleggers. However, when he stumbles upon a still inside an abandoned shack on his father's property, Andrew realizes who the real bootlegger is. Andrew decides to get proof of the truth. Andrew borrows a camera from the newspaper publisher and sits in wait for the real owner of the still. When the man appears, Andrew discovers that his initial instinct was correct. The real bootlegger is the town sheriff.

When everything is said and done, Andrew realizes that Bennie is not the terrible person Andrew wanted to believe he was. Hence, Andrew swallows his pride and extends a peace offering to Bennie. They lead their basketball team to the sectionals.

More summaries and resources for teaching or studying Throwing Stones.