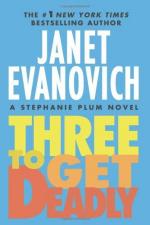 Janet Evanovich
This Study Guide consists of approximately 43 pages of chapter summaries, quotes, character analysis, themes, and more - everything you need to sharpen your knowledge of Three to Get Deadly.

Three to Get Deadly Summary & Study Guide includes comprehensive information and analysis to help you understand the book. This study guide contains the following sections:

This detailed literature summary also contains Topics for Discussion and a Free Quiz on Three to Get Deadly by Janet Evanovich.

Three to Get Deadly is the third installment in Janet Evanovich's Stephanie Plum series. Stephanie Plum is an inept bounty hunter who has found herself in the unenviable position of hunting down one of the neighborhood's most beloved citizens, Uncle Mo. The longer Stephanie looks for Uncle Mo, the more bodies she stumbles over, causing her to question the sainthood of this kindly ice cream shop owner. The reader follows along as Stephanie fights the wrath of her friends and neighbors in her attempt to not only do her job, but do what she believes is right for the safety of the neighborhood. Three to Get Deadly is another of Evanovich's comical thrillers that will leave the reader breathless.

Stephanie Plum is given the assignment of bringing in Uncle Mo, a beloved member of the burg, the tight knit neighborhood where Stephanie grew up. Uncle Mo owns a candy shop in the burg and everyone loves him. However, Uncle Mo was arrested for carrying a concealed weapon and failed to make his court appearance. Stephanie does not want this assignment, but she needs the money the apprehension will bring her. Stephanie reluctantly agrees. Stephanie goes to the candy shop and runs into a neighbor of Mo's who happened to be one of Stephanie's school teachers. Stephanie tries to check out Mo's apartment behind the store, but the teacher calls the police. Stephanie knows the police officer and avoids arrest, but she does not get to search the apartment as thoroughly as she would have liked.

Stephanie returns to the shop a short time later and finds a key to the apartment. Stephanie slips inside and searches the apartment, finding not only unexpected bed time reading, but keys to the candy shop downstairs. Stephanie lets herself into the candy shop for a quick look around. Before Stephanie has much of a chance to take a look, someone else enters the store. Stephanie surprises the intruder, only to have him knock her unconscious. When Stephanie wakes, she finds the intruder dead. Stephanie calls her old friend, Joe Morelli. Morelli is a cop, so he is able to run interference for Stephanie, saving her from an arrest on trespassing charges.

At the same time, Stephanie is in need of a new car. Stephanie stops by a car dealership and buys a small truck. Now Stephanie needs more cash, so she picks up another case. Stephanie and Lula, a friend and co-worker, pick up the new failure to appear at his job in the mall. However, on their way to the police station, the new truck stalls. In an attempt to keep the truck running, Lula revs the engine and accidentally runs into the car in front of her. When Lula and Stephanie get out of the truck to inspect the damage, the failure to appear runs away.

Back at the office, a friend of Lula's tells them that her boyfriend has run off with her car and she wants Stephanie to help her find it. Lula and Stephanie drive around town looking for the car and get lost. While trying to make their way back to the burg, they spot the car. Lula tells her friend who then decides to stake out the car herself. A few days later, the friend discovers that her boyfriend is dead. At the same time, Stephanie has gotten a tip on her missing Uncle Mo and is staking out an apartment building in the burg.

Stephanie has little luck with the apartment building. However, Stephanie has gotten the attention of a group of men somehow connected to Uncle Mo. These men drive to Stephanie's apartment and fire their weapons at her, telling her this is just a warning. A few days later, Stephanie runs into the same men at Mo's store where she has returned after getting a tip that Mo will be there. The men attempt to scare Stephanie away with violence, but are interrupted when the neighbors come over to see what is happening. Stephanie calls Morelli. As they are leaving, they smell something in the cellar. Morelli and Stephanie investigate only to find several bodies buried in the cellar floor. A few days later, Stephanie and Lula spot Uncle Mo in traffic. There is a body tied to the roof of Uncle Mo's car that falls off as Stephanie and Lula chase him. The body count is now up to eight.

Stephanie and Lula lose Uncle Mo. They pick up the body, put it in the trunk of the car, and take it to Morelli. Morelli tells Stephanie that all the bodies discovered thus far are known drug dealers. A short time later, Stephanie hears a rumor that Uncle Mo is in to making pornographic movies. Stephanie also learns that Mo has a house out in the country where he shoots these movies. Stephanie locates the house and takes Ranger with her to apprehend Mo. Just before Stephanie and Ranger take Mo out of the house, Mo's partner in crime shows up with a rocket launcher. The man destroys Stephanie's truck and engages in a gun fight with Ranger. Stephanie and Mo manage to escape into the woods and make it to safety.

More summaries and resources for teaching or studying Three to Get Deadly.

Three to Get Deadly from BookRags. (c)2022 BookRags, Inc. All rights reserved.