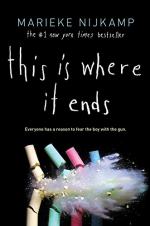 This Is Where It Ends Summary & Study Guide

Marieke Nijkamp
This Study Guide consists of approximately 68 pages of chapter summaries, quotes, character analysis, themes, and more - everything you need to sharpen your knowledge of This Is Where It Ends.

This Is Where It Ends Summary & Study Guide Description

This Is Where It Ends Summary & Study Guide includes comprehensive information and analysis to help you understand the book. This study guide contains the following sections:

This detailed literature summary also contains Quotes and a Free Quiz on This Is Where It Ends by Marieke Nijkamp.

The following version of the novel was used to create this study guide: Nijkamp, Marieke. This is Where it Ends. Sourcebooks Fire, January 5, 2016. Kindle.

Tragedy brings out the worst and the best in people, the students of Opportunity High School (OHS) learn from a school shooting in This is Where it Ends by Marieke Nijkamp. Although, people who would listen to him, surround him — including his sister, Autumn — Tyler Browne believes he is all alone. He blames his fellow students for his loneliness and takes his frustration out on them by bringing a gun to school. At the end of the day, thirty-nine students and teachers are dead and many more are injured.

The tragedy at OHS is over in less than an hour. Four narrators tell the story of what happens minute by minute during the shooting. Each tells his experience from his own perspective while the author alternates among them. Electronic messaging about the shooting, sent both by students inside the school, and outsiders reacting to the news, is also incorporated into each chapter.

Tyler had dropped out of school the end of his junior year. Before that, tragedy marred his life when his mother died in a car crash. When he learned his sister was dating another girl, Tyler lashed out at that girl in anger. He also fought with other boys at school. Things came to a head at the junior prom when Tyler’s girlfriend broke up with him when she discovered him trying to kiss the girl who was dating his sister.

Believing that their struggles were behind them, Autumn was relieved when Tyler told her that he was going to start back to school the beginning of the spring semester. Instead of being in his seat for the beginning of the semester assembly, however, Tyler secured the doors to the school and the auditorium. When the students were supposed to leave the auditorium to go to class, they discovered they were locked in. Tyler entered the auditorium and shot the principal. He then began shooting carefully selected students as the others cowered in fear.

Meanwhile, Tomas and Fareed did not attend the assembly because they were in detention. Tomas knew his sister, Sylv, is scared of Tyler and wanted to find out why. When he and Fareed were searching the principal’s student files, they heard gunshots. After Fareed called 911, they got bolt cutters from the janitor’s office to cut the chains on the main entrances to the school and the doors to the auditorium. Claire and Chris, two varsity track members, were also not in the assembly that morning. These two students also went for help.

Inside the auditorium, Autumn kept Tyler distracted while Tomas, Fareed and Sylv directed people out of the auditorium. Many were able to get away, but when Tyler turned to see the students escaping, he began shooting wildly. He left the auditorium in search of Tomas, Fareed and Sylv who had escaped to the second floor of the school. They planned to move to the roof to hide from Tyler as best they could. Knowing their plan is not a good one, Tomas tricked Fareed and Sylv into going out on the roof. Once they were there he closes the window and goes to face Tyler, hoping to delay him until his sister, Sylv can get to safety.

When they face off in the hallway, Tyler shot Tomas. Instead of running, Sylv managed to get the window open and went back inside the school. Meanwhile, Autumn snuck up to the upstairs hallway where she tried to talk her brother into surrendering. Sylv heard them talking. There were two gunshots as Tyler shoot his sister, who had always dreamed of being a dancer, in the knee, and then shot himself in the head.

More summaries and resources for teaching or studying This Is Where It Ends.

This Is Where It Ends from BookRags. (c)2022 BookRags, Inc. All rights reserved.