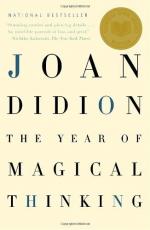 Joan Didion
This Study Guide consists of approximately 32 pages of chapter summaries, quotes, character analysis, themes, and more - everything you need to sharpen your knowledge of The Year of Magical Thinking.

The Year of Magical Thinking Summary & Study Guide includes comprehensive information and analysis to help you understand the book. This study guide contains the following sections:

This detailed literature summary also contains Topics for Discussion and a Free Quiz on The Year of Magical Thinking by Joan Didion.

This autobiographical memoir by noted author Joan Didion chronicles her experiences in the wake of the sudden death of her husband John Gregory Dunne, also a noted author. These experiences include the ongoing and life threatening, illness of their adopted daughter Quintana, sudden and almost crippling surges of feeling associated arising from lingering memories, and incomprehensible conversations with medical professionals. The book thematically explores the nature and manifestations of grief, as well as the inevitability of memory and the unexpected power of synchronicity.

The memoir opens with a narration of events on the night of the death of the author's husband—which she at first, in memoir as in life, can't bring herself to refer to as anything other than "the event". She describes how they were sitting down to dinner as they have always done, conversing as they have always done, when suddenly she became aware that he had stopped talking. She looked around, she writes, and watched as he collapsed without saying another word. She describes in terms both clinically objective and profoundly personal the events that followed—the arrival of paramedics, John being taken to the hospital, her own gathering of what she believed were necessary things (in particular, his medical history), and the circumstances of her arrival at the hospital, where she was almost immediately told that John was dead.

The main body of the book is taken up with the author's narration of her process of coming to terms with her husband's death, and the simultaneous near-fatal illness of their daughter Quintana. She (the author) writes of her increasing and multi-faceted determination to deny that John was even dead, a denial that co-existed with a deep seated longing for him to continue to be the companion in life and work that he had been for the last several decades. She also writes of how this sense of denial extended to Quintana's situation, as she (Quintana) was suddenly taken to a hospital in California following a sudden, massive brain hemorrhage.

Throughout the memoir, the author's determination to deny reality is challenged by her memory—specifically, the way memories of her life, work, and relationship with her husband (and daughter) continue to resurface in spite of her efforts to keep them at bay. She writes of the way those memories bring with them resonances of meaning that she believes she can, and sometimes even desperately wants, to apply to her current situation. After a while, she writes, she began to search those memories for meaning, hoping to find answers that the clinical, objective, fact-based responses of the medical profession seem unable to provide.

The narrative describes how Quintana eventually recovered enough to be sent back to her New York home, how the author accompanied her, and how upon her return the author found herself more willing and able to start getting on with her life—sorting out and putting away John's belongings, visiting places that were important to them, etc. At one point she returns to the church where she and John got married and where Quintana was married. But instead of feeling herself overwhelmed by memories and feelings, as she had been when she previously encountered meaningful places/events/circumstances, the author is instead able to participate in a personal ritual of farewell and closure, a ritual that symbolizes her slowly strengthening ability to live her life on her own.

The book draws to a close with a final narration of a memory involving John—how he once told her that it was necessary and right for her to ride the tides and ways of life rather than struggling against them. This, the narrative suggests, is what the author has finally discovered she is able, and prepared, to do—drawing her "year of magical thinking" to a close.

More summaries and resources for teaching or studying The Year of Magical Thinking.

The Year of Magical Thinking from BookRags. (c)2022 BookRags, Inc. All rights reserved.