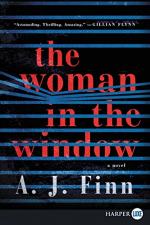 The Woman in the Window: A Novel Summary & Study Guide

A. J. Finn
This Study Guide consists of approximately 80 pages of chapter summaries, quotes, character analysis, themes, and more - everything you need to sharpen your knowledge of The Woman in the Window.

The Woman in the Window: A Novel Summary & Study Guide Description

The Woman in the Window: A Novel Summary & Study Guide includes comprehensive information and analysis to help you understand the book. This study guide contains the following sections:

This detailed literature summary also contains Quotes and a Free Quiz on The Woman in the Window: A Novel by A. J. Finn.

The following version of the novel was used to create this study guide: Finn, A.J. The Woman in the Window. William Morrow. January 2, 2018. Kindle.

In The Woman in the Window by A.J. Finn things are not as they appear when a teen boy, Ethan Russell, befriends an agoraphobic woman, Anna Fox, after moving to Anna’s Harlem neighborhood. Anna is also visited by Ethan’s mother, a woman Anna later believes she sees stabbed to death in the Russells’ home across the street. Because she drinks and takes medication for her psychological disorder that causes hallucinations, the police believe Anna only imagined she saw a murder. The Russells claim nothing happened and Anna is presented with a woman who claims to be Jane Russell, Ethan’s mother. Anna continues to be plagued with strange things happening — like her phone code being changed and a picture of herself sleeping being emailed to her from Jane Russell — but the police convince her that she is doing all of these things to herself. They base their refusal to believe her on her denial that her husband and daughter were killed in a car wreck. When the truth is finally revealed, Anna discovers that she has a reason to live despite all the trauma life has dealt her.

When Ethan first visited Anna, bringing a candle he said was from his mother, the psychiatrist in her woke up. Before Anna’s disorder locked her in her house, Anna had a successful practice working with children. She believed Ethan was a good kid but also sensed that he was afraid of his controlling father. When Anna met the woman she believed was Jane Russell (Ethan’s mother), Jane seemed to confirm Anna’s belief that Alistair Russell (Ethan’s father) was controlling and did not trust people easily. Anna and Jane quickly became friends as they spent an evening playing chess and drinking wine. Jane challenged Anna to nurture her hobby of photography and Anna snapped a picture of the sunset with her iPhone camera as proof she planned to try.

In the days that followed, Anna was troubled first when she heard screams coming from the Russells’ house. Both Alistair and Ethan indicated nothing was wrong but Anna thought Ethan sounded scared. The next day in the middle of watching a movie Anna looked at the Russells’ house and was distracted when she saw the woman she thought was Jane screaming at someone. A few minutes later Jane walked out of Anna’s range of sight but returned with what looked like a small hilt sticking from her chest and blood soaking her blouse. Anna notified the police but she was the one who was criticized because the police found nothing wrong at the Russells’ house. They decided Anna had experienced a hallucination based on the movie she was watching and because of all the drugs she took and the alcohol she drank. One of the cops even went so far as to accuse Anna of making up the stabbing because she wanted attention.

Meanwhile, Anna has been sharing bits and pieces of what happened to her to bring on her agoraphobia. Anna had an affair with her partner in her psychology practice and her husband, Ed, found out about it. Even though he wanted a divorce, Anna pushed for the family to go on one last skiing vacation together. At their hotel, Ed insisted that they tell Olivia, their daughter, they were getting a separation. When Olivia heard the news, she insisted that they go home. Ed made Anna drive even though the roads were slick and there was a snowstorm coming. Ed distracted her from her driving when a call from her lover came in on her cell phone. The next thing Anna knew, the car was sailing off the side of the cliff. It was 33 hours before she and her family were found.

When the detectives who investigate Anna’s report of a stabbing in the house across the street confront Anna with the truth that her husband and daughter died in that car wreck even though she led people to believe they were still alive, Anna loses faith in herself. She thinks that if she is the sort of person who can hold conversations with people who are dead, she could also have hallucinated a stabbing. Anna contemplates suicide until she finds a piece of evidence that proves the woman she first believed was Jane did exist. When she presents this proof, Anna learns the truth about the Russell family, and Ethan in particular.

More summaries and resources for teaching or studying The Woman in the Window: A Novel.

The Woman in the Window: A Novel from BookRags. (c)2022 BookRags, Inc. All rights reserved.