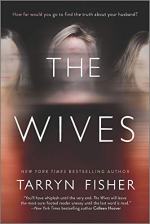 Get The Wives from Amazon.com
View the Study Pack
Study Guide
Order our The Wives Study Guide

Tarryn Fisher
This Study Guide consists of approximately 56 pages of chapter summaries, quotes, character analysis, themes, and more - everything you need to sharpen your knowledge of The Wives.

The Wives Summary & Study Guide includes comprehensive information and analysis to help you understand the book. This study guide contains the following sections:

This detailed literature summary also contains Quotes and a Free Quiz on The Wives by Tarryn Fisher.

The following version of the novel was used to create this study guide: Fisher, Tarryn. The Wives. Graydon House, Dec. 30, 2019.

In The Wives by Tarryn Fisher, Fisher explores the reality of mental illness and its fallout as she presents the thoughts of a woman led to believe she is the wife of a polygamist. Seth, the husband, has told Thursday that he does not want his three wives to have any contact with each other. When Thursday gets the courage to seek out the other two women, she learns that not even she is who she thought she was.

Thursday’s story opens with her thoughts as she prepares an elaborate dinner for her husband, Seth. He spends Thursday with her. They have a nontraditional polygamous relationship. Seth spends Monday and Tuesday with his other two wives, to whom he refers to as Monday and Tuesday. He tells Thursday that he does not want any of his wives to be in contact or know anything about one another.

Thursday’s curiosity gets the best of her when she finds a doctor’s receipt for Hannah Ovark in Seth’s pants. Thursday wonders if Monday, who is expecting Seth’s baby, is Hannah. Jealous and insecure, Thursday begins to research Hannah. Thursday believes that Seth divorced his first wife to marry her because his first wife, Thursday, did not want children. Thursday got pregnant, but lost the baby and had to have an emergency hysterectomy. Using the Internet, Thursday finds where Hannah’s address and unintentionally meets Hannah as she is admiring the Victorian house in which Hannah lives. The two exchange contact information. As Thursday is leaving, she notices that Hannah has bruises on her arm.

Thursday and Hannah meet again, once for breakfast and once for dinner. Hannah admits that her husband has a temper. She denies, however, that he caused a bruise on her face. Fearing that Hannah is in trouble, Thursday makes an appointment with Regina Coele, Seth’s first wife who is a lawyer, to find out if Seth was abusive with her as well.

Meanwhile, Thursday confronts Seth about Hannah’s bruises. He attacks her. She is taken to Queen County Hospital, suffering with a head injury. When Thursday claims that Seth is her husband and that they are having a polygamous relationship, Seth tells the doctor he has no idea what Thursday is talking about. Thursday is admitted to the psychiatric ward. She remembers her first visit there, after she lost her baby. She had tried to cut her wrists with a metal nail file.

Thursday put on an act of believing that she had been delusional, creating an alternate reality to deal with the loss of her baby. Thursday is released from the psychiatric ward but is still so delusional that she believes it is Seth who takes her home and stays with her even though it is really her father who cares for her. Thursday escapes by dissolving a sleeping pill into her father’s dinner. Thursday first visits Regina at her office. When Regina recognizes who Thursday is, she orders her to leave. Thursday follows Regina home and pushes her way into the house. Regina is at first angry but then seems to soften when Thursday tells her about losing her baby.

Regina later calls Thursday and asks to meet with her again. Regina tells Thursday a story that makes it appear that Seth was mentally ill and that he abused Regina in the same way he abused Thursday and is possibly abusing Hannah. Regina questions Thursday and discovers that Seth was making Thursday drink tea, his mother’s recipe, for Thursday’s nausea when she was pregnant. Regina claims that she had been pregnant and had miscarried about the same time during her pregnancy that Regina did. Thursday is convinced that Seth intends to make Hannah miscarry as well.

Regina provides Thursday with the address of Hannah and Seth’s new condo and promises to meet her there. Thursday arrives first. She goes inside first because she is so afraid that Hannah is being abused. Hannah lets Thursday inside. When Seth arrives, he accuses Thursday of being crazy, that they are not married, she was just his mistress. Regina, who arrives after Seth, confirms what Seth is telling Thursday. Thursday is angry because Regina set her up and grabs Regina’s throat. Seth attacks Thursday. Thursday pulls a gun and shoots Seth.

Because Regina and Seth set Thursday up, Thursday is sentenced to serve her time in a psychiatric ward. This time, she concentrates on trying to get well and understanding the way she was manipulated. Regina asks to visit Thursday, a visit that Thursday’s doctor believes will be therapeutic for her.

Regina tells Thursday that she manipulated her the way she did because she wanted to get revenge. When Thursday comments she is glad they both got away from Seth, Regina laughs at her. She tells Thursday they are not alike because Thursday is crazy. Thursday is angered because she has been locked up but Regina is still lying and is still free. In her anger, she knocks Regina over backward, slamming her head into the floor again and again.

More summaries and resources for teaching or studying The Wives.

The Wives from BookRags. (c)2022 BookRags, Inc. All rights reserved.