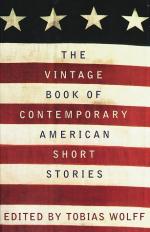 +Chapters Summary and Analysis
River of Names by Dorothy Allison
All the Way in Flagstaff, Arizona by Richard Bausch
A Vintage Thunderbird by Ann Beattie
Talk of Heroes by Carol Bly
The Darling by Scott Bradfield
Tall Tales from the Mekong Delta by Kate Braverman
Cathedral by Raymond Carver
The Fat Girl by Andre Dubus
Chopin in Winter by Stuart Dybek
Rock Springs by Richard Ford
A Romantic Weekend by Mary Gaitskill
Minor Heroism by Allan Gurganus
Testimony of Pilot by Barry Hannah
Wickedness by Ron Hansen
Emergency by Denis Johnson
The First Day by Edward P. Jones
A White Horse by Thom Jones
Girl by Jamaica Kincaid
Departures by John L'Heureux
Men Under Water by Ralph Lombreglia
Murderers by Leonard Michaels
Where Are You Going, Where Have You Been? By Joyce Carol Oates
The Things They Carried by Tim O'Brien
Aunt Granny Lith by Chris Offutt
Cody's Story by Robert Olmstead
Home by Jayne Anne Phillips
Moonwalk by Susan Power
Lawns by Mona Simpson
Helping by Robert Stone
Rules of the Game by Amy Tan
Dog Heaven by Stephanie Vaughn
Daddy Garbage by John Edgar Wideman
Train by Joy Williams
Free Quiz
Characters
Objects/Places
Themes
Style
Quotes
Topics for Discussion
Order our The Vintage Book of Contemporary American Short Stories Study Guide

Tobias Wolff
This Study Guide consists of approximately 31 pages of chapter summaries, quotes, character analysis, themes, and more - everything you need to sharpen your knowledge of The Vintage Book of Contemporary American Short Stories.

This detailed literature summary also contains Topics for Discussion and a Free Quiz on The Vintage Book of Contemporary American Short Stories by Tobias Wolff.

Narratorappears in River of Names

The narrator of "River of Names" is a lesbian woman who is trying to escape her past by making up a happy childhood when she talks to her girlfriend, Jessie. However, her past comes back to haunt her and the fake childhood she has invented seems to make the memories all the worse.

Walterappears in All the Way in Flagstaff, Arizona

Walter is the protagonist of All the Way in Flagstaff, Arizona, though he is imperfect and an alcoholic. The reader sees him spending time with his family, on a picnic where they argue and play and do a lot of normal family things. However, the narration confirms strain between him and his wife and eventually, she leaves him, which deeply hurts and changes him as a man.

Nickappears in A Vintage Thunderbird

Nick is one of the main characters of A Vintage Thunderbird. He is initially dating Karen, who breaks up with him but wants to remain friends and involved somehow; he is interested in a woman named Petra but his involvement with Karen prevents this from happening. He is extremely jealous and not too self-assertive, though he will from time to time pick arguments with Karen.

Emilyappears in Talk of Heroes

Emily is an older woman who must give a talk about Willi, the war hero, to a group of people interested in Norwegian things. She is an older middle-aged woman, whose grown daughter has come to stay with her. She wants her own life and seems happy to disappear into memories, though the memories of the story that she tells are bittersweet.

Dolores is the protagonist of The Darling. She is also a serial killer. The reader is allowed to get into her head at certain points in the story, as she goes through her killing sprees, making her seem human and understandable. She loves to read and often makes reference to certain literary works.

Narratorappears in Tall Tales from the Mekong Delta

The narrator of Tall Tales from the Mekong Delta is a woman recovering from addiction. She has a young daughter, who she adores and protects; still, when she meets Lenny, she is tempted by his stories and seduced by his strange manners, at the same time as she sees how dangerous they are. Eventually, she chooses to stay home with her daughter, rather than escaping with him.

Louiseappears in The Fat Girl

Louise is "the fat girl," the title character of this story. As the title implies, she struggles with her weight throughout her adolescence and early adulthood, finding that people value her mostly for her thinness. The only person who really seems to appreciate her for who she is is her father, who does not care what she weighs. She is loving and kind, though very possessive of those around her.

Dzia-Dziaappears in Chopin in Winter

Dzia-Dzia is the young boy's grandfather in this story. He is a difficult character. When his children were younger, he often left the house for days at a time to return without explanations. Now, older and sick, he entertains his grandson and challenges his intelligence by talking about Chopin and quizzing his grandson about classical music.

Earl is the hero of Rock Springs. He is trying to escape his life by getting out of the state. However, he is an idealist and not a realist and has not really thought through all the implications of his plan, eventually leaving him stranded again not far from home.

Unnamed womanappears in A Romantic Weekend

The unnamed woman of A Romantic Weekend believes herself to be a masochist, though the unnamed man, a sadist, questions this. She is slightly assertive and picks on a lot of the things he says, although once he begins to express interest in who she is, she becomes more interested.

Bryan is Richard's son and, rather effeminate, can never please his war hero father. The two of them have many arguments and even physical confrontations; Richard, who primarily occupies a physical world, cannot understand Bryan, who occupies more of a mental and aesthetic sphere.

Narratorappears in Testimony of Pilot

The narrator of Testimony of Pilot is an average, middle-class boy. He is a relatively good musician, but eventually must stop playing because he becomes deaf. He seems to have a certain amount of jealousy for those around them, coveting their girlfriends, their talent, and so on.

Hattie Benedict is the schoolteacher in Wickedness. She is caring but young and inexperienced, new to the area. When the snowstorm occurs, she tries to protect two of her schoolchildren who cannot get home in time; when they die in the blizzard, she is scarred for life both mentally and physically, as she looses her feet in the blizzard.

Georgie is an orderly at the hospital where the narrator works. He is kind and the narrator spends a lot of time with him; however, he is not totally balanced and seems to be mentally unstable.

Motherappears in The First Day

The mother in "The First Day" is seen only from the perspective of her young daughter. The mother is uneducated and cannot write, but takes her daughter around to school so that she can get a good education. She initially makes a mistake and takes her to the wrong school, though they eventually end up in the right place.

Ad Magicappears in A White Horse

Ad Magic is an advertising writer who finds himself traveling; he has spells where he does not remember where he is or even who he is. In this story, he shows a lot of kindness towards a sick white horse he finds lying on the beach.

The priest in Departures is shown as a cold, callous man whose religion drives him further and further away from his parents, his family, and ultimately a balanced life.

Guntherappears in Men Under Water

Gunther in "Men Under Water" is the landlord of several properties and a would-be playwright, who is very ambitious and employs the narrator not only as a handyman but also as a writing assistant. Though Gunther seems to be generally good-hearted, he also has a very cheap and ambitious streak that disturb the narrator.

The narrator of "Murderers" is an ordinary young boy who witnesses the death of one of his friends, shocking and damaging him.

Connieappears in Where Are You Going, Where Have You Been?

Connie in "Where Are You Going, Where Have You Been?" is a typical young girl: pretty, lively, with a lot of friends, who does not always get along with her mother. However, she is tempted by the outside world though scared of it, as she is protected by her lifestyle and her family, though she eventually must confront it in the form of Arnold Friend.

Ted Lavenderappears in The Things They Carried

Ted Lavender is the character who dies in the short story, "The Things They Carried." In this story, he is a very nervous, superstitious character and a lot of the things he carried are for protection against death and harm. When he dies, the men who are serving with him are deeply disturbed.

Beth is Casey's third wife. She is proud and stubborn, and when Aunt Granny Lith give her and her husband trouble, she decides that she is going to fix the matter once and for all. She is in the more typically masculine role in the relationship with Casey, making the decisions and telling him what to do.

G.R. is an aging logger who has to come to terms with his old age.

The narrator's Mom in "Home" is a woman who has been through many surgeries, which were not performed correctly - she is nervous and timid and afraid of her own body and her daughter's body. She is caring and sweet to her daughter, though they have normal arguments and discussions.

Margaret Many Woundsappears in Moonwalk

Margaret Many Wounds is an elderly Native American woman who is dying in "Moonwalk." Her two daughters have come to take care of her, and she explains her past to them. She is calm and spiritual, with a sense of humor, and has been deeply in love with two men.

The narrator of "Lawns" is a young girl who has been molested by her father and currently works in the college mailroom, where she steals things. She is sensitive, though she has a tough exterior that denies this. Eventually, she has to come to terms with her past.

Elliot is a social worker who has many problems of his own, including alcoholism.

Meimeiappears in Rules of the Game

Meimei is a young Chinese-American girl, straddling two cultures as she grows up in the United States with her Chinese mother. She learns how to play chess and becomes an excellent player, though in the process, she further distances herself from the culture of her mother.

The narrator in "Dog Heaven" is a young girl, the child of an army officer who moves around a lot. She is more sensitive than she lets on, though her exterior is spunky.

Daddy Garbage is the dog and the title character of the story. He is curious and well-remembered by those who knew him.

Danica is a young girl traveling with the Muirheads, on the cusp of adolescence.

More summaries and resources for teaching or studying The Vintage Book of Contemporary American Short Stories.