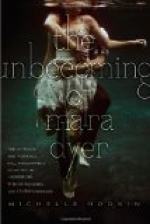 The Unbecoming of Mara Dyer Summary & Study Guide includes comprehensive information and analysis to help you understand the book. This study guide contains the following sections:

This detailed literature summary also contains Topics for Discussion on The Unbecoming of Mara Dyer by Michelle Hodkin.

A teenage girl, Mara, comes to the realization that she has a terrible special ability in the novel The Unbecoming of Mara Dryer by Michelle Hodkin. Mara and her family have just moved to Florida in hopes the relocation will help Mara heal from the accidental death of her best friend, Rachel. Continuing deaths, however, make Mara realize that she is at the center of all the strange fatalities and may have even caused the death of her own friend. Noah Shaw, an eccentric and intelligent boy, that Mara meets in Florida, holds his own secret that might help Mara control her own ability if she makes the right choice.

Circumstances surrounding the collapse of the Tamerlane State Lunatic Asylum and the death of Rachel, Claire, and Jude are uncertain. Mara is the only survivor of the accident and she cannot remember why the teenagers were there or what made the building fall. Hoping that it will help her deal with emotional issues coming from the loss of her friends, Mara suggests to her parents that they move to Florida. Soon after the move, however, Mara begins hallucinating. In her first day of class, she visions the room collapsing. She also sees the faces of Claire and Jude when she looks in a mirror. Making matters worse, Mara imagines the cruel owner of a dog dead, and he dies just as she had imagined.

It is when Mara's Spanish teacher dies, again as Mara had imagined her death, that she decides she needs to remember the night of the Tamerlane's collapse. Her boyfriend, Noah Shaw, goes with her to a Santeria priest who helps her to remember that she was the cause of her friend's death. Noah shares with Mara that he has an ability to heal which he believes can help counter Mara's ability to kill. He also offers to help her harness her ability so that it does not hurt those whom she loves.

Meanwhile, Mara's brother, Joseph, is kidnapped. Noah has a vision of the kidnapping and takes Mara with him to rescue Joseph. Believing that the man whom Mara's father is representing in court might be responsible for Joseph's kidnapping and for murdering a girl, Mara kills again. This time her father is injured. With Noah's help, he survives his injuries. Mara decides to turn herself in to the police station but as she seeks the officer who knows her best, she sees Jude at the police department and realizes that he is still alive.