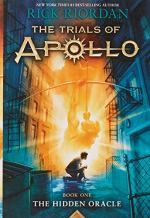 The Trials of Apollo, Book 1: The Hidden Oracle Quotes

Importance: Here, Apollo introduces himself in his present sixteen year-old form, explaining he used to be a god. Because he is blamed for a civil war that nearly destroys human civilization, he is sent to live among human beings. Now, Apollo must prove himself to return as a god.

Importance: When Mikey and Cade beat up Apollo, Apollo is stunned to discover he is bleeding. Gods do not bleed, but Apollo is no longer a god. Apollo’s recognition that he is bleeding is a very human statement, and reveals his suffering will be unlike anything he has been through before. He will not only experience physical pain before the end of the novel, but emotional pain -which is another kind of bleeding.

The Trials of Apollo, Book 1: The Hidden Oracle from BookRags. (c)2023 BookRags, Inc. All rights reserved.