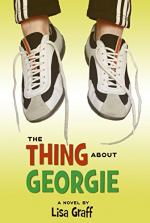 Related Topics
A Tangle of Knots

Lisa Graff
This Study Guide consists of approximately 49 pages of chapter summaries, quotes, character analysis, themes, and more - everything you need to sharpen your knowledge of The Thing About Georgie.

The Thing About Georgie Summary & Study Guide includes comprehensive information and analysis to help you understand the book. This study guide contains the following sections:

This detailed literature summary also contains Quotes and a Free Quiz on The Thing About Georgie by Lisa Graff.

The following version of this book was used to create this study guide: Graff, Lisa. The Thing About Georgie. HarperCollins, 2006. Kindle Version.

At the beginning of the novel Georgie has a normal life. He is a dwarf, but for him, the limitations he faces because of this fact is just the way it is. He has a best friend, Andy, and loving parents who are both professional musicians. Before he was born, they had hoped that he would be a musician like them. Even though they try to find an instrument he can play, they cannot. Still Georgie loves listening to his parents play. The only negative thing about his life is that a girl nicknamed Jeanie the Meanie picks on him more than the other kids. Georgie takes her treatment in stride, however.

Things begin to change with the introduction of new people in his life who he fears will threaten his position with his parents and Andy. He and Andy have a dog walking business and one day when they are walking the dogs, Andy suggests that Russ, a new kid he knows but that Georgie does not know, join their dog walking business. Georgie does not like the fact that Andy has been talking to Russ without his knowledge. He tells Andy that he does not like the idea. Andy drops the topic even though he looks disappointed. Then, when Georgie gets home he finds out that his mother is pregnant.

The next time Georgie sees Andy, he tells him about the baby. Andy tells him that his grandmother from Italy is coming to live with his family and he has to share his room with her. Georgie helps him put up a barrier so that he has some privacy and then he helps Andy’s family put up their Christmas decorations. Later, he helps his family do the same, but becomes sad when he realizes that the baby will take his job of putting the star on top of the tree because he or she will be the smallest in the family. He gets even more upset when he realizes that one day the baby will be taller than he is. He is used to taller children outside of his house, but not in his own house.

Georgie thinks that things are really bad for him on Christmas Eve. His mother gets a shock when she turns off the Christmas tree lights. Worried about the impact on the baby, Georgie’s parents go to the hospital to have the baby checked. They think that Georgie will be better off spending the evening with Andy, so they drop him off and go to the hospital. Georgie does not like this at all. He sees it as his parents already paying more attention to the baby then to him.

During the evening, Georgie and Andy see Russ at church. Russ tries to talk to Georgie about the dog walking business, but Georgie ignores him. Georgie becomes angry as Andy and Russ talk to each other. Finally, he disconnects from them. When they get back to Andy’s house, he and Andy have a fight about the dog walking business because Georgie says he does not want Russ to be a part of it and it is his business because it was his idea. Andy tells him that he will start his own business with Russ. Andy insults Georgie and Georgie insults Andy’s grandmother. Georgie and Andy originally decided not to sleep in Andy’s room, but during the evening, after the fight, Andy goes upstairs to sleep in his room, with his Grandmother, leaving Georgie to sleep alone downstairs on Christmas Eve.

Georgie calls his father to pick him up early the next morning. The baby is okay, but this news makes Georgie madder. He calls Andy to apologize, but their rift grows when Georgie tells Andy that he cannot be friends with Russ if he is friends with him. Andy chooses Russ.

When they get back to school, it is time for the class to choose partners to work with for their school project. Normally, Georgie would have worked with Andy, but Andy pairs up with Russ. In the end there are only two people without partners, Georgie and Jeanie the Meanie, so Georgie has to work with her. They have to write a report on Abraham Lincoln. While they are working in the library, Georgie realizes that Jeanie checked out a book about dwarfs that the librarian had ordered. He wonders why she did this because he thinks that she hates him. For the duration of the project, Georgie tries to avoid working with Jeanie. When he finds out that they do not have class time to finish the report, he realizes he has to go to her house. She spends a lot of time talking about things other than the project, like which president she would like to be in the school play and suggesting the Georgie be George Washington. He fears that she has discovered that his middle name is Washington, which she has done. When they are about to finish, her brothers come in and make fun of her, first saying that Georgie is her boyfriend and then that she does not have any friends. When they ask Georige whether he is her friend, he says nothing. This makes Jeanie mad and she calls Georgie mean.

When the report is finally due, the students need to sign up to say who they would like to play in the performance. Georgie wants to put down George Washington, but does nothing. He later finds out that Russ is going to be George Washington and Jeanie has signed him up to be Abraham Lincoln. He tries to get out of it, but cannot.

During the rehearsals, Jeannie realizes that Georgie is nervous and creates a costume that makes him tall and gives him long arms. His performance is a hit. While waiting to go on stage, he realizes that Allison, a girl he has a crush on is not nice and that Jeanie is, in reality, the nice one. On the way home he has a conversation with his family about the baby and whether they were upset when they found out that he could not play a musical instrument. Their answer pleases him. Georige and his friends decorate his room and he gives it to the baby. At the end of the novel he is friends with Andy, Russ, and Jeanie and is ready to be the big brother of his little sister.

More summaries and resources for teaching or studying The Thing About Georgie.

The Thing About Georgie from BookRags. (c)2022 BookRags, Inc. All rights reserved.