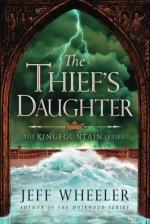 Jeff Wheeler
This Study Guide consists of approximately 65 pages of chapter summaries, quotes, character analysis, themes, and more - everything you need to sharpen your knowledge of The Thief's Daughter.

This detailed literature summary also contains Quotes and a Free Quiz on The Thief's Daughter by Jeff Wheeler.

The Thief's Daughter is the second novel in Jeff Wheeler's Kingfountain series. Several years have passed since the end of the previous novel, The Queen's Prisoner. Owen Kiskaddon and Elysabeth Victoria Mortimer (better known as Evie) are young adults, each with responsibilities to the family holdings and toward King Severn, the ruler of Ceredigion. Ceredigion is one of the larger and more prosperous kingdoms of Owen's world. Owen is Fountain-blessed, meaning he has magical power that happens to only a few of the world's inhabitants. The powers manifest differently in different characters, and each has some specific way of fueling the power to make it more usable.

Owen and Evie have been constant companions for more than seven years. They are in love and fully expect Severn will grant them permission to marry. However, Owen is the Duke of Westmarch, representing nearly a quarter of the kingdom's land. Evie is the granddaughter and heir of the Duke of North Cumbria, typically called "the North." If the two united, their holdings would be substantial, making their wealth and power rival Severn's. Severn will not allow them to marry each other, knowing he must use them to make alliances with other countries that will benefit Ceredigion. Severn chooses Iago Llewellyn, the king of the smaller, poorer country of Atabyrion. Iago is not an adept ruler and his country suffers because of it. While Owen is heartbroken over losing Evie, Evie admits that she has a fondness for Iago and that she chooses to do as Severn commands.

Meanwhile, the kingdom is split by intrigue and danger. Severn's older brother, Eredur, died. Severn took the throne from Eredur's sons, claiming they were illegitimate and therefore ineligible to rule. One of those boys, Eyric, has grown into a man and believes he has the support of other kingdoms to retake his throne. Eyric is actually a pawn in those countries' own plans. Owen's Fountain-given power manifests in several ways, including his ability to withstand other magical powers and the ability to see weaknesses and patterns, making him a brilliant strategist. When Eyric's supporters attack Ceredigion, Owen's army is drawn in one direction. However, he instinctively knows he has to remain at St. Penryn, a sanctuary where the famed King Andrew died. There is a myth that the Dreadful Deadman will rise from this place, and Owen believes he has to keep his army at this location to save the kingdom.

When Eyric and his wife, Kathryn, arrive, Owen hears the voice of The Fountain say that Eyric's unborn son is the Dreadful Deadman. Owen captures Eyric, as Severn has commanded, but helps Kathryn remain hidden until her son is born. Owen and a skilled herbalist named Etayne are the only ones present for the birth. The child is stillborn but Owen knows how to revive the boy, just as an herbalist named Ankarette revived Owen (who was also stillborn). When Ankarette revived Owen, she passed on the magic that has marked Owen as special, which indicates that Owen has probably done the same for this child. Owen makes arrangements for the child to grow up in anonymity while being trained for the life that awaits him.

As the novel ends, Owen and the kingdom are in a state of chaos. Severn has become a monster, though Owen is not certain exactly what has pushed him to this point. Owen knows that he might have taken different actions regarding Eyric if he had known what Severn had become. Owen is also still struggling to find all the information he needs to understand exactly what is happening. There is a mysterious chess set with pieces no one can see to move, though one piece has moved since the set came into Owen's possessions. There are also questions of loyalty as Owen senses that some are hiding their true motivations. Additionally, the king's niece, Elyse, has vanished, apparently married to a king in another kingdom. However, no one knows whether she went willingly.

More summaries and resources for teaching or studying The Thief's Daughter.