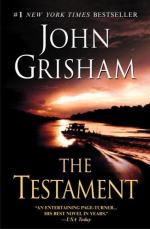 John Grisham
This Study Guide consists of approximately 41 pages of chapter summaries, quotes, character analysis, themes, and more - everything you need to sharpen your knowledge of The Testament.

The Testament Summary & Study Guide includes comprehensive information and analysis to help you understand the book. This study guide contains the following sections:

This detailed literature summary also contains Topics for Discussion and a Free Quiz on The Testament by John Grisham.

The Testament is the story of Troy Phelan, his will, and the struggle over the distribution of his estate. Troy commits suicide and leaves behind a controversial will. The estimated value of his assets at the time of his death was approximately eleven billion dollars. The will leaves nearly all of his assets to his illegitimate daughter, Rachel. Because of this, the will is perceived as offensive by his other children who are quick to contest it. They are encouraged to do so by their selfish lawyers, most notably Hark Gettys, who earn generous hourly fees for each hour they spend in court haggling over the will. At the time of her father's death, Rachel was a missionary living amongst the Ipica Indians deep inside the Pantanal region of Brazil in South America. To notify her of her father's gift, a semi-retired lawyer, Nate O'Riley, was sent to find her.

Nate's journey was both factual and metaphorical. A recovering alcoholic and substance abuser, Nate undergoes many changes while searching for Rachel. Her exact location is a mystery and getting there is a matter of both skill, in the form of a guide named Jevy, and luck, because even Jevy became lost multiple times. Once they find her, Rachel shares her faith with Nate and he grows spiritually. Old habits are difficult to eradicate, however, and Nate has set backs. He also contracts dengue fever and becomes very ill. Following his recovery Nate returns to America and is dissatisfied with the life he left behind. He starts anew and only returns to Washington D.C. to attend the Phelan case proceedings. He acts as Rachel's lawyer, but if it weren't for her, he wouldn't practice law at all. To complete the process, Nate returns to the Pantanal with paperwork for Rachel to sign. He is saddened to discover that she died from malaria during his time away.

The Phelan will is settled with Rachel's portion placed in a trust to assist the charities she believed in. Her siblings each receive a flat settlement greater than what their father had envisioned but significantly less than Rachel's portion. Nate retires from law and focuses on his sobriety and repairing his relationships with his children.

The Testament from BookRags. (c)2022 BookRags, Inc. All rights reserved.