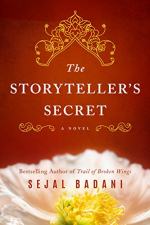 Sejal Badani
This Study Guide consists of approximately 47 pages of chapter summaries, quotes, character analysis, themes, and more - everything you need to sharpen your knowledge of The Storyteller's Secret.

This detailed literature summary also contains Quotes and a Free Quiz on The Storyteller's Secret by Sejal Badani.

The following version of this book was used to create this study guide: Badani, Sejal. Lake Union Publishing, 2018. First Edition.

Jaya, a woman living in modern New York City, suffers her third miscarriage with her husband Patrick. Unable to deal with the emotional turmoil, Patrick leaves Jaya. Jaya is devastated by this double loss but cannot find solace from her mother Lena, an Indian immigrant, because Lena has been emotionally distant from Jaya her whole life. Jaya then begins to suffer intermittent blackouts, which she cannot explain. Jay learns her grandfather, Lena’s father Deepak, is deathly ill back in India and he wanted to see his estranged daughter and sons one last time. None of his children will agree to see him, including Lena. When Jaya asks her mother why, Lena cryptically says that banishment from home was her punishment for being born. Jaya decides she wants to get in touch with her roots so she departs for India against her mother’s wishes.

In India, Jaya tracks down her mother’s former home. A servant named Ravi is thrilled to see Jaya but tells her that Deepak passed away two days before she arrived. Jaya is upset, but Ravi says he will tell her the story of her grandmother, Amisha.

The novel switches to past tense in Amisha’s sections. Amisha was wed to a local boy named Deepak when she was a young teenager. She moved in with his family and she was no longer expected to see her former family, as was customary. On their wedding night, Amisha and Deepak were nervous about losing their virginity. Amisha told Deepak a story to relax; she had a natural affinity for spinning yarns and it was how she made sense of life. Deepak did not care for her story, instead taking her virginity and mostly ignoring her after their wedding night except for sex and family functions. Deepak’s mother, Chara, told Amisha that she was lucky to be part of their family since they were well-regarded in the village for owning the mill. After briefly rebelling, Amisha learned not to antagonize Chara.

Eventually Amisha was allowed to hire a servant. She chose a boy named Ravi who was turned away from every house in the village for being an untouchable (a member of the lowest social caste). Chara fumed when Amisha brought an untouchable into her home but Deepak allowed Ravi to stay. Grateful for Amisha’s kindness, Ravi was loyal and hard-working. He also kept her secret that she regularly wrote stories.

In the present, Ravi takes Jaya to the local school where he tends to a lush garden once owned by Amisha. He tells Jaya that Lena declined to inherit the property and that Amisha’s legacy may soon be handed over to government ownership. In the village, Jaya speaks to her mother and father. Jaya’s mother tells her she loves her for the first time.

In the past, the British set up an English school in the village. Amisha met the head of the school, a British officer named Stephen, and admitted her desire to learn English so she could write her stories. Stephen convinced her to attend class. Too afraid of what Deepak would do if he found out, Amisha quit on the first day. Stephen then went to her house and offered to personally tutor her in English if she taught the children creative writing. At Ravi’s behest, she accepted. Stephen began to tutor Amisha in the school’s lush garden. She had stimulating conversations with him about their past, the occupation, and the local community. In her class, Amisha taught a talented young teenage girl named Neema who reminded her of herself.

Amisha and Stephen grew closer. After leaning that Stephen’s brother died in the war, she gifted him with a story about two brothers meeting in Heaven. Stephen was touched. They became slightly more physically and emotionally intimate but kept they distance for fear of retribution from the community at large. In class, Neema wrote a story about a girl killing herself instead of going through with an arranged marriage. Amisha deduced that Neema was set to be married soon.

In the present, Jaya meets Ravi’s great-grandchildren, Amit and Misha. Misha suffers from polio because she cannot get good medical care in rural India. Patrick also calls Jaya but the poor connection drops the call. Jaya continues to suffer blackouts after talking to him.

In the past, Ravi injured himself one day while trying to board up the sides of the house in preparation for a hurricane. No doctor would attend to him because he was an untouchable. Fearing for his life, Amisha ran to Stephen’s house. Stephen spirited Ravi away to a military base to receive medical care. When Stephen came back to tell Amisha that Ravi would survive, she was so overcome with emotion that she kissed him. They continued to kiss but did not make love. Amisha then learned that Neema tried to kill herself by self-immolation in order to avoid her arranged marriage. Amisha blamed herself for not helping Neema. Deepak learned what Amisha had been teaching the children and forbade her from returning to school. Amisha was distraught at not seeing Stephen. Once he had recovered, Ravi acted as a messenger for Stephen and Amisha. Stephen was then reassigned to a post outside of India. Devastated, Amisha went to Stephen’s house and they finally made love.

Six weeks later, Amisha realized she was pregnant with Stephen’s child. Stephen tried to persuade her to run away with him but she refused to leave her children. He then left India. Several months later, Amisha gave birth to Lena. She convinced Deepak she was his daughter. Amisha was heartbroken over Stephen’s departure but could not show it. Years later, she contracted a fatal disease from a mosquito bite. She died soon after. Deepak remarried a woman named Omi, who was cruel to Lena. Omi found Amisha’s old love letters to Stephen and exposed her affair. Deepak fired Ravi for hiding the secret and took out his anger on Lena by emotionally neglecting her.

In the present, Ravi reveals his greatest secret: Stephen once came back to win Amisha but Ravi turned him away before she could find out for her own good. Jaya forgives Ravi. Jaya speaks to Patrick over the phone again. He tells her he loves her and he made a mistake. He surprises her by showing up in India. They get back together. Having finished hearing her grandmother’s story, Jaya has nearly stopped suffering blackouts. She realizes her mother was always cold to her because she was emotionally stunted due to her upbringing. Jaya and Patrick decided to adopt children. Ravi agrees to let Misha and Amit travel with them to London so Misha can get polio treatment. Amisha’s spirit appears to Ravi and tells him he did good work and now his time is over. He passes away.

More summaries and resources for teaching or studying The Storyteller's Secret.