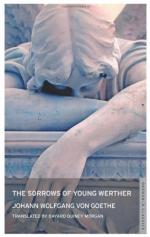 Plot Summary
+Chapters Summary and Analysis
May 4, 1771
May 10 through 15
May 17 through 30
June 16 through July 24
July 26 through September 10
October 20 through December 24
January 8 through September 3, 1772
September 4 through November 26
November 30 through December 6
The Editor to the Reader
Free Quiz
Characters
Objects/Places
Themes
Style
Quotes
Topics for Discussion
Order our The Sorrows of Young Werther Study Guide

Johann Wolfgang von Goethe
This Study Guide consists of approximately 31 pages of chapter summaries, quotes, character analysis, themes, and more - everything you need to sharpen your knowledge of The Sorrows of Young Werther.

The Sorrows of Young Werther Summary & Study Guide includes comprehensive information and analysis to help you understand the book. This study guide contains the following sections:

This detailed literature summary also contains Topics for Discussion and a Free Quiz on The Sorrows of Young Werther by Johann Wolfgang von Goethe.

"The Sorrows of Young Werther," in many senses a classic of the epistolary genre of novels, opens with the titular protagonist having just completed a move to a rural town made in order to escape a romantic entanglement with a woman named Leonora and her sister. Werther is positively enraptured with his new surroundings, and, at the cost of his artistic endeavors, he spends much time meandering the countryside and observing the peasants' lifestyle. At several points, he remarks approvingly that the simple and idyllic life of the country folk reminds him of the "patriarchal" society of the Bible. On his travels, he meets many peasants whose stories will develop alongside his own: the peasant brothers Hans and Phillip, their mother, and a servant in love with his widowed employer.

Werther soon discovers Wahlheim, a hamlet resting in the hills about an hour's walk from his residence, and is instantly taken with it and its people. It is in this village that Werther encounters the object of his adoration, the gracious, beautiful and kind Lotte. Although warned that the charming Lotte is spoken for, the emotional Werther is immediately taken with this young woman. This fateful encounter is the heart of the story. His fondness for Lotte is not based on logic or reality, rather it is rooted in passion and fantasy. Werther considers his passionate heart as his most laudable characteristic. His impassioned behavior, however, leads him down a dark path with tragic results.

Werther is able to believe in the possibility that he can win Lotte's heart until the return of her fiance, Albert. With the return of Albert who stakes his claim for Lotte, Werther is no longer able to ignore reality. His clinging and emotional dependence on Lotte compel Albert to eventually call for an end to his wife's friendship with Werther. While Lotte is not completely innocent—she does not want Werther out of her life—there is no hesitation in her ultimate decision to adhere to her husband's wishes.

After Werther embraces and steals a kiss from Lotte, her mixed feelings for Werther become apparent. If she is forced to give him up, she will have a hole in her heart. Though they do not openly discuss it, Lotte and Albert both know that for their relationship to survive, Werther must die. When Werther sends his servant with a note asking to borrow Albert's pistol, Albert and Lotte are well aware of its intended use—yet they do not stop him.

Werther kills himself with the pistol. In a farewell letter to Lotte, he tells her that they were meant for each other and that she belongs to him. He offers his certainty that they will reunite one day in heaven.

More summaries and resources for teaching or studying The Sorrows of Young Werther.

The Sorrows of Young Werther from BookRags. (c)2022 BookRags, Inc. All rights reserved.