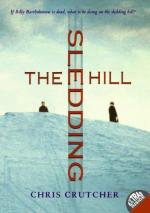 This detailed literature summary also contains Topics for Discussion on The Sledding Hill by Chris Crutcher.

The Sledding Hill is a novel by Chris Crutcher. The story follows the main character, Billy Bartholomew, as he tries to help his best friend, Eddie Proffit, put the pieces of his life together after Eddie's father dies and Billy dies. After finding his father and Billy's bodies within a month of each other, Eddie stops talking. In an effort to help Eddie learn to deal with such tragedy, Billy's spirit remains Earthbound as he walks his friend through the steps of grief and letting go.

Billy says a few things to Eddie, but when Billy first starts to appear, Eddie thinks that he's going crazy. Eddie believes that his best friend is haunting him. In order to ease Eddie into the idea that Billy's spirit is appearing to Eddie, Billy starts to appear to Eddie in his dreams. Billy takes them to the sledding hill, where they enjoyed so many good times together growing up. Eventually, Eddie starts to come around to the fact that it's not a dream, but that Billy really is appearing to him.

When Eddie starts school without Billy, Eddie still isn't talking to anyone. Eventually, Eddie starts going to the janitor's closest, where he talks to Billy's father. He swears Billy's father to secrecy. When the reverend of the local church, who is also an English teacher at Eddie's high school, tries to get a book banned from Eddie's Really Modern Literature class, Eddie plots with Billy's father to finally take down the tyrant Reverend Tarter.

Once Eddie is making new friends and even on his way to gaining a girlfriend, Billy knows that it is time to move on. The primary reason that Billy stayed on Earth was to help Eddie overcome his fear of loss. Once Eddie is beyond this, Billy says goodbye.