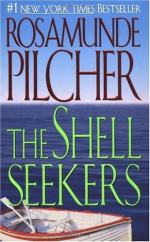 Rosamunde Pilcher
This Study Guide consists of approximately 36 pages of chapter summaries, quotes, character analysis, themes, and more - everything you need to sharpen your knowledge of The Shell Seekers.

Where Lawrence, Sophie and Penelope retreat when World War II breaks out. Porthkerris is also where Penelope meets and falls in love with Richard. Just before she passes away, she will visit this coastal town to see her friend Doris and donate The Shell Seekers to its art museum.

When Penelope sells her house, her children (Nancy in particular) encourage her to avoid moving back to Porthkerris, but instead into a small house called Podmore's Thatch to be closer to them. It has a wonderful garden and she enjoys the house, but she misses her friends and the coastal lifestyle at Porthkerris.

An important piece of artwork by Lawrence Stern, The Shell Seekers symbolizes to Penelope her childhood and her time in Porthkerris. When Noel and Nancy blithely suggest to their mother that she sell the piece, it symbolizes how little they...

More summaries and resources for teaching or studying The Shell Seekers.