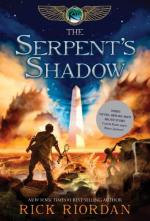 Rick Riordan
This Study Guide consists of approximately 25 pages of chapter summaries, quotes, character analysis, themes, and more - everything you need to sharpen your knowledge of The Serpent's Shadow.

This detailed literature summary also contains Topics for Discussion on The Serpent's Shadow by Rick Riordan.

The Serpent's Shadow is the third book in the Kane Chronicles Series by Rick Riordan. In this novel, Kane siblings, Carter and Sadie, have been directly involved in the releasing of the ancient Egyptian god Apophis and now are struggling to find a way to stop him. Apophis, the god of chaos, wants to swallow the sun and destroy the world. No one knows of anyway to stop him, but Sadie and Carter believe they have stumbled upon a secret that will do just that. As they fight to put their plan into action, Carter and Sadie find themselves not only facing their most daunting task yet, but struggling with personal turmoil as Sadie finds herself caught between two boys that she can never have, and Carter struggles with his feelings for the distant, secretive fire warrior Zia. The Serpent's Shadow is an exciting adventure that not only takes readers into the complicated world of Egyptian gods, but thrusts them into teenage angst on a new level that will leave them breathless and rooting for unlikely heroes.

Sadie and Carter arrive in Dallas with a small band of magicians from their nome, Brooklyn House, to stop Apophis from destroying the last of a group of scrolls that might hold the secret to stopping Apophis from destroying the world. Carter convinces the magician in charge of the Dallas museum to let them see the scroll in question, but arrive too late to stop the attack by Apophis. Carter and his band are able to stop the destruction of the museum, with the help of Sadie, but the scroll is destroyed as are the people of the local nome. However, they have saved a unique box that a mysterious figured told Sadie must be saved as it holds the answer to their problem.

Sadie, Carter, and their friends return to Brooklyn House where they investigate the box. It appears to hold nothing, but Bast, the Cat god, tells them it holds the shadow of Tut. Bast explains that shadows are a part of the soul that gods often hide to protect themselves from complete destruction. This gives both Sadie and Carter a great deal to think about as they have already come to the conclusion that the best way to stop Apophis is to cast an execration spell. A conversation with Zia, his uncle's assistant at the First Nome, and with Horus, his chosen god, makes Carter more convinced that by bottling Apophis shadow in a statue and saying the execration spell, they can rid the world of him and send him back to the Duat.

Carter tells the rest of the group that he wants to go see Thoth, the god of wisdom, to ask about his plan. However, before allowing him to go, the group insists that Carter attend a school dance with them. At the dance, a reluctant Carter goes off to dance with one of Sadie's friends while Sadie is visited by the god, Anubis, on whom she has a crush. As they talk, Anubis confirms that Sadie and Carter must find Apophis's shadow. However, before Anubis can tell Sadie all he has come to say, they are pulled apart by Anubis's grandfather, Shu, the god of wind. Shu tells Sadie that Anubis has been forbidden to see her anymore.

When Shu and Anubis leave, Sadie finds that Shu has brought a Russian magician to see her. The Russian tells Sadie about an impending attack on the First Nome by a group of magicians who have risen in revolt against their uncle, Amos, the current Chief Lector. Sadie rushes off to take the Russian to Amos and warn him. While there, Sadie tells Amos her idea of attempting to save her friend, Bes. Sadie and Zia go to see Bes. Afterward, they meet up with Carter at the Hall of Justice where they ask their father to release a magician to them, Setne. Setne is released to them, after some negotiation, so that he can find a book of Thoth that will tell them how to find Apophis' shadow. However, Setne is something of a con man and even though he does as promised, he makes the trip difficult with his secrets and attempts at escape.

Sadie is able to restore Bes to life by using his spell in a reverse execration spell. Sadie believes that this spell will also work against Apophis. They decend on the First Nome where a battle has already begun. Zia, who has become a vessel for Ra, keeps Apophis busy while Carter and Sadie save Amos and his people from the attack. When the attack in the First Nome is over, Carter and Sadie turn their attention on Apophis where they manage to send him back to the Duat with the execration spell. However, this move also sends all the gods away as well.

More summaries and resources for teaching or studying The Serpent's Shadow.