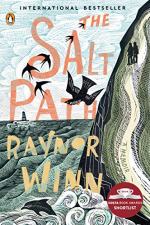 Raynor Winn
This Study Guide consists of approximately 42 pages of chapter summaries, quotes, character analysis, themes, and more - everything you need to sharpen your knowledge of The Salt Path.

This detailed literature summary also contains Topics for Discussion on The Salt Path by Raynor Winn.

The following version of this book was used to create this study guide: Winn, Raynor. The Salt Path. London: Penguin Books, 2018. Kindle Edition.

Raynor Winn opens her memoir, The Salt Path, with a short prologue featuring her and her husband, Moth, waking up in their tent on the beach to the shock of the rising tide. She watches in awe as he picks up the tent and runs across the beach with it over his head, when only months ago he struggled to put on his own coat without help. The memoir then turns to the months leading up to this day, 36 nights and 243 miles into their trek along the South West Coast Path of England, tracing how they got there and what led to their decision to walk the long and arduous path and wild camp along the way.

Part One begins when, at 50 years old, Raynor and her husband Moth lose a legal battle and are being forced to give up their beloved farmhouse in Wales, which they have spent the last 20 years building their family home into a sanctuary and a source of income as a vacation rental. They raised their two children there—Rowan and Tom, now in university—and have treasured memories spent there. They now face impending poverty and homelessness. And just as it seems like their situation cannot become worse, Moth is diagnosed with a chronic illness, corticobasal degeneration (CBD), which will only give him several years more to live. The doctor prescribes rest and relaxation, indicating that there is no possible cure. Ray, not able to imagine life without her husband, does not accept this. With seemingly nothing less to lose and nowhere else to go, they decide to pack the essentials into two rucksacks, purchase a tent and sleeping bags, and set off on the South West Cost Path, using Paddy Dillon’s guidebook.

In Part Two, they begin their trek at Minehead in early August. The plan is to wild camp along the route, because their small weekly tax credit of 48 pounds will only cover food for the week, so they cannot afford to pay for camp sites. They begin walking through the steep woods, camping at night, boiling tea in the morning with their little portable stove, and then walking again all day. As they meet people on route, they discover that if they are honest about their situation (that they are experiencing homelessness) they are met with prejudice, but if they simply allude to how they have sold their house to go on a long walk, they are seen as inspirational. They suffer through great physical hardship on the walk, under blistering hot weather, violently heavy rain, travelling over dangerous terrain of cliffs and sea. They are hungry, sunburnt, and achy, and Ray is concerned that they have put Moth’s health at greater risk by making this decision. When he runs out of his painkillers, he begins suffering from withdrawal. But soon, miraculously, he finds that his mind begins to clear, and his body begins to strengthen.

By Part Three, they are experiencing headaches, dizziness, and constant hunger. They feel desperate and angry. Occasionally, they receive kindness from people they meet on the road, such as a man who brings them back to his house and offers food and hospitality. But they also receive discrimination from people who exhibit fear and suspicion towards them. At this point it is September, and the weather is becoming colder. A few times, Moth is mysteriously mistaken as someone else, and eventually they discover that people think he is a poet named Simon Armitage. In Part Four, they continue to walk along the path, and Ray watches in disbelief as Moth’s health increases exponentially. Here, she returns to the scene she described in the prologue, as Moth runs up the beach with the tent above his head. Against all the odds, the walk has healed his pain, strengthened his body, and cleared his mind. They feel as though they made the right decision and now, they fear the end of the path, not knowing what the next step will be. When they reach Land’s End, the landmark they planned on finishing at, they decide to hold onto the sense of freedom and purpose that walking and camping together has given them and they continue along the path. They enjoy the beauty of the outdoors, marveling at cliffs, waterfronts, woods, coves, etc. However, as the autumn temperatures continue to drop, Moth’s health is affected, and they decide that they need to find a roof to stay under for the winter. Once they reach Polruan, despite doubts that they are making the wrong choice, they accept an offer from an old friend named Polly to stay in a shed in exchange for some labor.

In Part Five, in late October, they settle into Polly’s shed and Moth begins plastering the walls. They feel displaced and miss the outdoors. Moth’s health quickly deteriorates, and he descends into debilitating pain and weakness once again, like he felt before they began their walk. Ray begins working as a sheep wool packer. Ray cannot imagine life without Moth and begins to live with the constant feeling of his ghost nearby. The months go by, and by spring, they learn that they must vacate the shed and they must decide on their next step. Moth applies to earn his teaching degree at university and they decide they will use the student loan to rent a small accommodation. It is now July, so they decide to pack up and head to the path again until September.

In Part Six, they return to the path. This time, they start at the other end, at Poole, and they plan to work their way back past Plymouth and towards Polruan, where they ended their walk abruptly. At first, they struggle physically to regain their routine and their strength, but Moth’s health quickly improves, and they know they made the right decision. They make new friends along the path and witness new and stunning natural sights along the way. They decide to slow down and enjoy the scenery, savoring each moment together. Money is still scarce and causes hunger and tight budgeting and planning is required to pay for food and also save for the ferries and bus fares needed for parts of the path that they skip over. By the time that it is late August, they make it to Polruan. They regret the end of their path, and just when they begin to panic that they will not be able to find accommodations before Moth begins school, they meet a kind woman who listens to their story and decides to rent her apartment to her. It is the perfect solution and only fitting that they will live at the end of the path together.

More summaries and resources for teaching or studying The Salt Path.