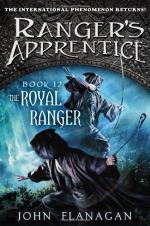 John A. Flanagan
This Study Guide consists of approximately 67 pages of chapter summaries, quotes, character analysis, themes, and more - everything you need to sharpen your knowledge of The Royal Ranger.

No one ever died from being too careful.
-- King Duncan (Chapter 2 paragraph Page 40)

Importance: King Duncan’s land had been at peace for years. However, he knew that could change at any time. He was always cautious.

Len was trying to equate the current Princes Cassandra—the caretaker rule of the kingdom—with the picture his companion had drawn of a wild, adventurous tomboy terrorizing the castle guards.
-- Len (Chapter 2 paragraph Page 51)

Importance: The sentry was trying to imagine the royal and dignified Princess Cassandra as a tomboy when she was her daughter Maddie’s age.

Think about it. Could Maddie be in safer hands? Will loves her. He’s her godfather. He looks upon her as his niece, of not his surrogate daughter. You’d be entrusting her to his care. And you know he would die before he let any harm come to her.
-- Halt (Chapter 7 paragraph Page 175)

Importance: Halt is trying to convince Cassandra and Horace to allow Maddie to train under Will...

More summaries and resources for teaching or studying The Royal Ranger.