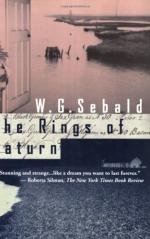 The Rings of Saturn Summary & Study Guide includes comprehensive information and analysis to help you understand the book. This study guide contains the following sections:

This detailed literature summary also contains Topics for Discussion on The Rings of Saturn by W. G. Sebald.

The Rings of Saturn, by W.G. Sebald is in part a memoir, a travelogue, and a study of the effects of History, Time and the Individual as the author travels on a pilgrimage along the Suffolk coastline in the United Kingdoms. As he journeys the author encounters places and characters of interest both in the present day and from the past on his quest to understand both himself and his surroundings in their correct place in the passage of time and how they all relate to death.

A meditative work, The Rings of Saturn is curiously written as a continuing monologue with sudden diversions into historical analysis and the author's own interior dream scape as he attempts to come to terms with what he encounters around him in his environment. The author records his reactions to events and the visions or phantasms that he experiences along his journey, waving together a picture of a journey that not only took place in the physical world, but at least in part in the depths of his own psyche.

Starting from the viewing of a hospital window whilst he was incarcerated on a psychiatric wing, the author goes on to describe the time he spent on a journey a year before from the outskirts of Lowestoft in East Anglia to Ditchingham at the southern end of Suffolk, describing his journey past empty dunes and along the coastline of East Anglia. Along the way, he discovers crumbing manor houses and estates that were once the glories of the eighteenth century, populated with strange figures such as George Wyngham Le Strange, the poet Charles Swinburne, or an exiled French Vicomte (Viscount). It is through his discoveries about these people and these remarkable places that the author starts to unravel the accepted 'boring' history of the landscape, finding instead within its characters resonances with his own life and sometimes moving lessons about human nature.

Traveling over a landscape he obviously knows well and loves, the author reflects on the scenes of past battles and prosperity as he travels into his own past through meeting and thinking about his friends, Michael Hamburger and Frederick Farrar. His friends hold for him the keys it seems to a lost age and to understanding the individual's place in history.

The author's moving and intellectual account ranges widely across time and the globe as his steps travel narrowly on one route as he discovers that even the smallest place and fact can become connected to greater events or hold within them the seeds of meaning and even truth.

The Rings of Saturn from BookRags. (c)2022 BookRags, Inc. All rights reserved.