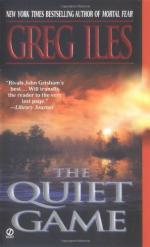 Greg Iles
This Study Guide consists of approximately 44 pages of chapter summaries, quotes, character analysis, themes, and more - everything you need to sharpen your knowledge of The Quiet Game.

This detailed literature summary also contains Topics for Discussion and a Free Quiz on The Quiet Game by Greg Iles.

THE QUIET GAME by Greg Iles is a novel revolving around attorney and author Penn Cage and his hometown of Natchez, Mississippi. Cage returns home with his daughter after the death of his wife to the home of his parents to rebuild their lives. Arriving in the sleepy town, Cage discovers blackmail and a murder from decades ago, tearing up the lives of those for whom he cares.

Penn Cage returns to his family home in order to help his daughter, Annie, after the death of his wife Sarah. Upon his arrival, Penn is stunned to find that his father, Dr. Tom Cage, is being blackmailed by a patient, Ray Presley. Many years ago, Presley had killed a man that had assaulted Penn's aunt. Presley had acted on his own but had used Dr. Cage's gun. Dr. Cage had been shocked and Presley had kept his gun in order to ensure that Presley would not be accused of the crime. Though various avenues are considered, Penn is left with only one: buy the gun from Presley, which he does.

Penn consents to an interview with the publisher of the Natchez Examiner, Caitlin Masters. The two discuss his life and end up in a debate about racism in the south. Penn makes casual comments about a racial murder in 1968 that Caitlin runs in the paper, infusing the public with mysteries of the past, and igniting a highly-charged atmosphere in Natchez. Though Penn has no intention of becoming involved, a visit from the mother and the widow of Del Payton stirs his soul and he begins to investigate the crime.

During the investigation Penn's family is threatened and their housekeeper is killed when their house is fire-bombed. Ike Ransom, a Natchez sheriff, feeds Penn some information about Payton's murder, tying the civil rights activist to Penn's family's nemesis, Leo Marston. Seeking to pay Marston back for the harm he has caused his family, Penn begins the investigation, digging up the past, and stirring racial tensions in Natchez.

The arrival of his first love, Olivia Marston, adds the difficulties that Penn is having in figuring out his life and the mysteries surrounding the death of Del Payton, but with the help of Caitlin Masters and several others who want the truth told, Penn is able to discover that the racial murder of Payton had not been a civil rights issue at all. Del Payton had been murdered in order to quiet the civil rights movement, so that a factory could move into town. Leo Marston had arranged the killing, so he would be able to lease the land he controlled to the company. Payton had been killed simply so Leo Marston would make a profit.

With Penn Cage's relentless digging into the past, he is able to solve the thirty-eight year old mystery and put to rest the question of why Del Payton is killed. The innocent people that had been hurt in the process are finally free to move on with their lives. Penn is also able to move on, finally able to leave his past with Olivia behind, and take care of his daughter Annie.

More summaries and resources for teaching or studying The Quiet Game.