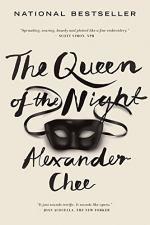 The Queen of the Night Summary & Study Guide

The Queen of the Night Summary & Study Guide Description

The Queen of the Night Summary & Study Guide includes comprehensive information and analysis to help you understand the book. This study guide contains the following sections:

This detailed literature summary also contains Quotes and a Free Quiz on The Queen of the Night by Alexander Chee.

The following version of this book was used to create this study guide: Chee, Alexander. The Queen of the Night. Mariner Books Houghton Mifflin Harcourt. 2016. Version One.

The novel begins in the year 1882, where rising Opera star Lilliet Berne learns that her life has become a muse for a future opera. She is shocked because only a few people know her life story. On a quest to find the one who betrayed her, she begins her story of her childhood. As the daughter of religious parents, she was ridiculed by her mother for prideful singing. In an effort to appease her mother, she pretended to lose her voice. However, before she could reveal the deception, her entire family died of the fever. Lilliet buried them and headed to New York. She hoped to find passage to her mother’s family in Lucerne. Her singing and ability to ride a horse landed her a spot in a circus heading to Paris. Once there, she performed hundreds of shows before her final act with the Emperor. There, she received a priceless ruby brooch. She left the circus to start a new life in either in Paris, or Lucerne.

After leaving the circus, Lilliet met a courtesan named Euphrosyne. Their friendship prompted Lilliet to remain in Paris. However, when Lilliet defended her friend from a threatening man, the two are arrested and locked in a women’s prison named Saint-Lazare. Unwilling to lose her friend, Lilliet agreed to register as a courtesan. After her time in prison, she was invited to l’Hotel des Majuers-Plainsirs by the owner, Odile. Odile explained that Lilliet was welcome to stay if she worked for her, and could only leave if she paid off the debt from imprisonment. Lilliet learned how to be a proper courtesan. Eventually, Euphrosyne introduced to a man known as The Tenor. He adored her voice and asked Odile if he could take her to the opera. Odile agreed and he took Lilliet to meet a courtesan singer named Cora Pearl. Cora told Lilliet to never fall in love, and revealed that she was the Tenor’s previous “project” that failed. When they returned, the Tenor purchased Lilliet from Odile. Euphrosyne returned the ruby brooch, revealing that she had stolen it while Lilliet was in prison. The Tenor moved Lilliet into an apartment and she began her new life.

Months after her sale to the Tenor, Lilliet auditioned for a prestigious music school the Conservatoire. They revealed that she was a Falcon Soprano; a rare type of voice that is so powerful, it could break at any moment. They were hesitated to enroll her, but promised to consider it. The Tenor was so confident in her acceptance that he took her to study under a famous teacher named Delsarte. Delsarte taught Lilliet acting and how to conceal her true emotions. After she received a rejection letter from the Conservatoire, Lilliet decided she must leave the Tenor. She pretended to attack a pair of policeman, and ended back in Saint-Lazare. However, when Lilliet's cellmate La Mutte - an orphan girl incapable of speech - died, Lilliet used Delsarte’s lessons and pretended to be La Mutte. The ruse works, and she was sent to an orphanage under the name Sidonie.

After many months at the orphanage, Lilliet met the Comtesse; a powerful woman in Paris. The Comtesse arranged for Lilliet to work for the Empress in the palace called Tuileries. Lilliet loved her job and was treated very well by the other workers. However, things changed when Lilliet was chosen to accompany the Empress on a two-month long hunt. Finally, Lilliet met the Empress personally, and realized that she is caught between the Comtesse and the Empress; both of which hate the other. While at the hunt, Lilliet met a mysterious piano player she calls the composer. Immediately, she fell in love. However, when the Tenor found her, he explained that they were going to escape and she would return to Paris with him. Lilliet decided to escape on her own. While at a masked ball (where the Tenor was going to take her away) she escaped and slept with the composer.

Once Lilliet reached a train station, she considered leaving for Lucerne. However, she decided she did not want to live a normal life and decided to go back to Paris. Once there, she messaged the Comtesse and revealed she could talk all along. The Comtesse took Lilliet in, but told Lilliet that she owes her. A few weeks later, the Comtesse returned Lilliet to the Tenor and told Lilliet she is not allowed to leave him again. Begrudgingly, Lilliet obliged. The Tenor promised to continue her musical training and took her to a woman named Pauline. Meanwhile, in the present day, Lilliet tracks down the Comtesse. However, the Comtesse is protected by a royal guard and refuses to see Lilliet. Lilliet leaves, believing the woman is her betrayer.

Back in the past, Lilliet arrived in a town called Baden-Baden where she met Pauline. Despite Lilliet’s misgivings, she came to like Pauline and was excited to train beneath her. Pauline taught Lilliet to control her voice and play the piano. After a year together, Lilliet began to consider Lilliet family. However, when war started between Prussia and France, the Tenor forced Lilliet to return to Paris with him.

Back in Paris, Lilliet is reunited with the mysterious composer, Aristafeo Cadiz. Lilliet invited him back to her apartment to practice. The Tenor confronted her about him, but let the lessons continue as long as Aristafeo left by night. After a few more weeks, Lilliet escaped the Tenor once again. She traveled to Aristafeo’s home to ask him to leave Paris with her. Instead, he convinced her to stay. They two survived the war together and considered themselves to be husband and wife. However, when Lilliet found a secret room he used for his affair with the Empress, Lilliet was heartbroken. She placed the brooch in the room and left.

Eventually, Lilliet traveled to Tuileries where she met Eugene, the commander of the newest regime the Commune of Paris. The two spent the night together. The next day, she traveled back to her apartment and found a note from the Tenor. He detailed an escape plan where she would meet a German spy and take a hot air balloon across the border into Germany. Lilliet showed the note to Eugene. He told her the plan was risky, but promised to help. They devised a plan to get her into the balloon while Eugene killed the spy that he believed would be the Tenor. Later, Lilliet invited Aristafeo to a private performance for the Commune. He came, but they were attacked by the Germans. The two escaped and spent a few nights hiding in the zoo. Then, Aristafeo knocked Lilliet out and took her to the balloon. As he secured her in the balloon, Aristafeo admitted that the Tenor paid him to ensure her safety. Aristafeo sent the balloon away just as Eugene attacked. Lilliet watched helplessly as Aristafeo was stabbed to death.

After crashing in Germany, Lilliet woke up in the hospital with two broken arms. The Tenor introduced her to the Prince, a man she remembered from the hunt. One day, the Prince promised her freedom from the Tenor and an endless bank account if she acted like she was escaping the Tenor. She agreed, but knew that she had to do something to save her life. The next day, she told the Tenor that they could not be married and that she must return to Paris. Before she left, she discreetly told him the Prince was sending her away. The Prince met her back at her apartment and revealed that he planned to kill her if the Tenor could not forget her. Lilliet, however, told him that the Tenor knew her death would be caused by him, and would never forgive him. The Prince left, and Lilliet is finally free. She debuted in Paris later the same year.

Eight years later, Lilliet’s past catches up with the present narrator. Lilliet finally meets with Simonet, and realizes that he could not be author of the book. She declines to join his opera and leaves. Later, she attends a ball thrown by Euphrosyne to quell the rumors of Lilliet’s engagement to the Tenor. At the ball, however, she finally meets the composer of her opera: Aristafeo. He reveals that Eugene spared him after realizing that he was not the Tenor. He spent eight years writing the opera for her, but never built up the courage to talk to her because of her popularity. He asks Lilliet to meet him at a salon outside of town which the Tenor takes her to. There, even though she meets another of Aristafeo’s lovers, the two reconnect during a horseback ride in the rain. Afterwards, she learns that Aristafeo is going to duel the Tenor for her honor. Knowing that Aristafeo will not win the duel, Lilliet kills the Tenor to protect Aristafeo and leaves Paris.

Aristafeo and Lilliet reunite at an old friend’s home. While there, her maid Doro finds the flask Lilliet used to kill the Tenor. With the Paris police suspicious of Lilliet, she and Aristafeo leave for London on the advice of Doro. They tell the press that Lilliet is in Paris with a sickness and then hide her out in a hotel. While there, Aristafeo tries without success to find someone who will fund the opera. After a few months of hiding, Lilliet decides to go to an opera. Unfortunately, the Empress also arrives, and Lilliet curtsies to her to avoid being recognized. However, the press accuses her of sympathizing with an exiled Empress. When Lilliet returns to her hotel, she discovers that Doro has been working for the Comtesse all along, and has taken the flask back with her to Paris. Lilliet realizes that she can never return or she will be arrested and executed for the murder of the Tenor. When Aristafeo realizes what Lilliet has done, he plans to leave her, believing she is a monster.

However, Lilliet meets a wealthy America named P.T. Barnum who wants to produce the opera in his country. He knows that Lilliet’s reputation would lead to a successful show. He offers her a huge contract and promises to make her a star with a comfortable life. Knowing that her life in Europe is over, Lilliet agrees to the deal and leaves Aristafeo behind. Lilliet invites her old circus from the beginning of the novel to perform with her. Throughout the next year, Lilliet performs on a farewell tour in America. Lilliet tells the reader that uncontrollable fate was never her curse. Instead, her curse was the ability to choose her destiny all along.

The Queen of the Night from BookRags. (c)2022 BookRags, Inc. All rights reserved.