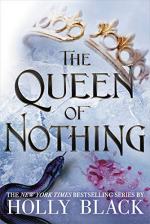 The Queen of Nothing Summary & Study Guide

Holly Black
This Study Guide consists of approximately 64 pages of chapter summaries, quotes, character analysis, themes, and more - everything you need to sharpen your knowledge of The Queen of Nothing.

The Queen of Nothing Summary & Study Guide Description

The Queen of Nothing Summary & Study Guide includes comprehensive information and analysis to help you understand the book. This study guide contains the following sections:

This detailed literature summary also contains Quotes and a Free Quiz on The Queen of Nothing by Holly Black.

The following version of the book was used to create this study guide: Black, Holly, The Queen of Nothing (Folk of the Air). Hatchette Book Group, New York, NY, 2019. Kindle AZW file.

Jude was a child living a typical life in the mortal world when a man arrived and killed her parents. The man was Madoc, the biological father of Jude's half-sister, Vivienne. Madoc was angry that Vivienne's mother took his daughter from Faerieland. Madoc accepted that his ex-wife's other children, though mortal, were also his responsibility. So, he took Jude and her twin, Taryn, back to Faerieland as well. Their home was in the region known as Elfhame. Madoc raised Jude and Taryn as members of his family with all the advantages wealth could buy.

When the old High King decided it was time to step down and pass the crown to one of his sons, both Madoc and Jude had plans involving the son adopted by Madoc's second wife. The boy named Oak was young, and Madoc planned to put Oak on the throne while Madoc held the real power. Knowing Madoc's cruelty, Jude manipulates Prince Cardan into taking the throne to give Oak time to grow into the role. Over the next few months, Jude held a position of power in Elfhame, though there were constant threats, including the attraction Jude and Cardan felt for each other. During this time, Cardan vowed loyalty to Jude, making her his wife, but they were immediately faced with yet another threat. As the second novel came to an end, Cardan banished Jude to the mortal world.

As this novel opens, the Royal Astrologer gives a prophecy upon the birth of Cardan. His prophecy is that Cardan would be the last of High Kind Eldred's children. Additionally, Cardan would destroy the throne and the crown. The novel then reverts to Jude's perspective. She is living in the mortal world, doing jobs for various faeries. One day, she confronts a cannibalistic faerie named Grima Mog who has been eating other faeries. Because she lived in Faerieland so many years, she knows she can earn this money by exacting a promise from Grima Mog, and she does, though she suffers injuries and loses her knife in the process. When she gets home, her twin, Taryn, is there. Taryn has been living in Faerieland with her husband, Locke, but Taryn now reveals that she killed Locke. She is going to be formally questioned in Faerieland. They will use glamour to force her to tell the truth. Jude is under a spell that makes her immune to the glamour, and she agrees to go to the inquest in Taryn's place. The moment she arrives, High King Cardan recognizes her, though everyone else assumes she is Taryn. When they have a moment alone, Cardan is about to explain his love to her; but, they are attacked by Madoc's troops.

Madoc is the faerie who raised Taryn and Jude. Now he has plans to take the crown for himself. He takes Jude, believing he was rescuing Taryn, to the camp site he has set up with some he believes are supporting his effort to take the crown. Jude manages to send word to her half-sister Vivienne that she is trying to escape from Madoc. Vivienne arrives with reinforcements, including Cardan, Taryn, and Grima Mog. They make it back to the palace where Cardan makes it clear that Jude is now going to take her rightful place on the throne at his side. He also reveals that he worded her banishment in a way that she could have broken it anytime she wanted. He tells her that he had been trying to contact her, but his letters were intercepted.

When Cardan and Madoc face off over the crown, Madoc challenges the strength of Cardan's rule, saying the people of Faerieland had no choice but to accept him as his ruler. Madoc, using a magic sword, breaks the throne in half. Cardan says he wants to give the people the right to choose. He breaks the crown in half. The crown is magic, and breaking it reveals the built-in curse of turning Cardan into a huge serpent that immediately kills the smith who made the crown.

Jude tries to retain control of the kingdom and initially feels that binding Cardan with magic that will make him docile is the only answer. However, she realizes that would not be fair to Cardan. She decides that killing the serpent is the only way to set Cardan free, and she fully expects that to mean that he dies. She and everyone else is surprised when he emerges from the body of the snake. He and Jude take their place on the throne, vowing their love for each other in the process.

More summaries and resources for teaching or studying The Queen of Nothing .

The Queen of Nothing from BookRags. (c)2022 BookRags, Inc. All rights reserved.