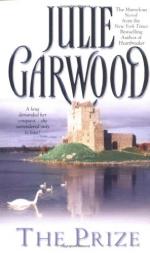 Get The Prize from Amazon.com
View the Study Pack
Study Guide
Order our The Prize Study Guide

Julie Garwood
This Study Guide consists of approximately 29 pages of chapter summaries, quotes, character analysis, themes, and more - everything you need to sharpen your knowledge of The Prize.

The Prize Summary & Study Guide includes comprehensive information and analysis to help you understand the book. This study guide contains the following sections:

This detailed literature summary also contains Topics for Discussion on The Prize by Julie Garwood.

"The Prize" by Julie Garwood tells the story of a Saxon girl whose home is invaded by a Norman soldier who was told to bring her to London as a prize. Nicolaa is a strong woman who is determined to hold on to what is her own. She and Royce are attracted to each other, and they have to learn how to live together in harmony.

Royce is sent on a mission by the king. He is to go to the Saxon household and bring Nicolaa to London where she will be awarded to a nobleman. Although he has an inexperienced group of soldiers with him, Royce breaks through the stronghold only to find that one twin, a nun, is there, but Nicolaa is gone.

He talks with the nun and then leaves to deal with other things. By the time he discovers that the household doesn't have twin daughters, the real Nicolaa has left. She finds sanctuary in the church. Royce gets her away from the Abbey and takes her to London where she impresses the king and queen. After saving a child whose gown is on fire, she is allowed to choose her own husband. Nicolaa picks Royce.

They aren't in love yet, but those close to them realize that it won't be long until they are. They already show signs of loyalty to each other. When Saxons try to involve Nicolaa in an assassination plot, she refuses. Royce protects her and is more concerned about her than he is of himself. They go back to Rosewood and are attacked along the way. During the fight, Nicolaa discovers that her brother Thurston is alive. She tells Royce about her brother one night when she is in a drunken state.

They talk about the situation when she is sober, and Royce encourages her to always be truthful. They have some minor altercations and power struggles but work most things out. Royce brings Ulric and Justin back, and Nicolaa is thrilled to see the baby. She isn't allowed to see Justin until he settles into his soldier training.

Thurston surprises her by coming into the home, and she defends Royce and says she loves him. Royce lets Thurston leave, but won't let him take his son. Ulric goes to live with the family of Thurston's wife. The next time Nicloaa sees Justin, she realizes that he is thriving in training. He even laughs for the first time in a very long time. This pleases her, and she decides to do all she can to make Royce's life peaceful. She is not a naturally peaceful person and so this is difficult for her.

Nicolaa and Royce are invited to a tournament and after winning numerous feats, Justin and other top soldiers go with them to fight. The tournament is exciting and Royce's men do well, especially Justin. Morgan and Henry try to wreak havoc, and Nicolaa kills one of the men with a stone from her sling as he tries to shoot an arrow at the king. Royce and Nicolaa face a future together, solid in their love for each other.

More summaries and resources for teaching or studying The Prize.

The Prize from BookRags. (c)2022 BookRags, Inc. All rights reserved.