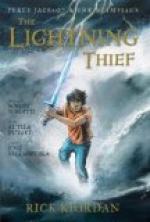 Rick Riordan
This Study Guide consists of approximately 50 pages of chapter summaries, quotes, character analysis, themes, and more - everything you need to sharpen your knowledge of The Lightning Thief: The Graphic Novel.

This detailed literature summary also contains Topics for Discussion on The Lightning Thief: The Graphic Novel by Rick Riordan.

"The Lightning Thief: The Graphic Novel", written by Rick Riordan and illustrated by John Rocco is the comic book adaptation of the first book in the "Percy Jackson & the Olympians" series. This fantasy novel follows the journey of twelve-year-old Percy Jackson as he learns that he is the son of Poseidon, the Greek God of the Sea, and is sent on a quest to retrieve Zeus's Master Bolt in order to prevent war between Zeus, Poseidon and Hades which could destroy all of Western Civilization. "The Lightning Thief: The Graphic Novel" is an entertaining work of fiction that integrates Greek mythology into modern American society to show how a troubled boy finds his true identity and strength.

During a school field trip to the Metropolitan Museum of Art, Percy is attacked by his math teacher, Mrs. Dodds, who turns into a fury from the Underworld, but when Percy questions another teacher about the event, Mr. Brunner insists that there is no Mrs. Dodds. With the school year over, Percy goes home to see his mother, Sally, who announces they are taking a trip to the beach. As Percy and Sally discuss Percy's father at the cabin, Grover, Percy's best friend who is revealed to be a satyr, arrives to warn them of approaching danger, so Sally urges the boys to her car so they can flee; however, on the drive, Sally's car flips, and as they walk through the words, she is attacked by a Minotaur and disappears. Enraged, Percy rips a horn from the beast before passing out.

Percy wakes at Camp Half-Blood where Mr. Brunner reveals that he is actually a centaur named Chiron. Furthermore, this camp is for the children of the Greek gods who exist and are bound to Western Civilization. Percy is placed in Cabin 11 where all those whose lineage is undetermined are placed, and here, he befriends Luke. During a game of Capture the Flag, Clarisse, the daughter of Ares, attacks Percy near the creek, but when he falls into the water, he manages to defeat her and his injuries are healed, thus indicating he is the son of Poseidon. Chiron explains that this is dangerous since Poseidon, Zeus and Hades took an oath to refrain from siring any more half-bloods because their powerful children affect the human world too much. Additionally, Zeus's Master Bolt, the symbol of his power, has been stolen, and Zeus suspects Percy of being the thief, thus Percy is sent on a quest to find the Master Bolt which Chiron believes was stolen by Hades. Percy has only ten days to retrieve the bolt, else war will be declared on the summer solstice.

Before Percy leaves on his quest with Grover and Annabeth, Luke presents him with flying shoes from Hermes, suggesting they may be useful during his quest. The trio are confronted by furies in New York City, and Percy is attacked by Echidna in St. Louis where he also receives three pearls from Nereid on Poseidon's behalf, to use if he is in danger. Ares offers guidance and assistance at a diner and tells Percy that his mother is alive. When Percy, Annabeth and Grover finally arrive at D.O.A. Recording Studios in Los Angeles, they convince Charon to escort them to the Underworld.

In the Underworld, the flying shoes which Grover wears tries to drag him into Tartarus, but Percy and Annabeth rescue him. Percy confronts Hades who accuses him of stealing his object of power, the Helm of Darkness. Objecting, Percy opens his pack from Ares as proof only to reveal the Master Bolt. Hades reveals Sally, offering a trade, but Percy uses Poseidon's Pearls so that he and his friends can escape, promising he will return for his mother.

The trio land in the ocean, and on the beach, they are confronted by Ares who admits his role in the thefts before Percy defeats him in a fight. Percy gives the Helm of Darkness, left behind by Ares, to a fury, asking that she return it to Hades and assure him that there is no need for war. He then returns to New York where he takes the elevator in the Empire State Building to the 600th floor where Olympus floats above the city. Zeus accepts the peace offering, and Poseidon expresses pride in his son for completing the quest. Percy returns to camp where he, Annabeth and Grover are lauded as heroes. Because of his success, Grover is granted a license to search for Pan, the god of the satyrs, and Percy is ecstatic to find that Hades has restored Sally to the world since the Helm of Darkness has been returned. Percy happily leaves Camp Half-Blood with his mother.

More summaries and resources for teaching or studying The Lightning Thief: The Graphic Novel.