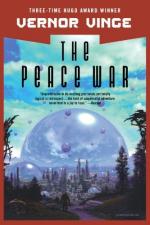 This detailed literature summary also contains Topics for Discussion and a Free Quiz on The Peace War by Vernor Vinge.

Paul Naismith is known as the Tinker's "wizard." He is a brilliant mathematician and there are many who realize that his loss will be a terrible blow to the Tinkers. Those people urge that he take an apprentice or teach a class of some sort in an effort to share at least some of that knowledge. Paul, well past seventy, is among the majority of the population. There are few children following the plagues of decades earlier. One of the children who has survived is Wili Wachendon. At fifteen, he is very small for his age, having fallen victim to one of the diseases that causes children to simply waste away. However, Wili is brilliant and comes to Paul's attention when he beats an arcade game.

Wili is arrested by a local police officer, Miguel Rosas. Known as Mike, he is trying to figure out what to do with the child when Paul says he will take Wili on as his apprentice. Paul takes Wili home with him and Wili immediately begins planning his escape—and the things he will steal during that escape. He soon discovers that Paul and the others in the house trust him and Wili responds to that trust, eventually learning a great deal from Paul and his computer system. Paul risks everything to get Wili the bioscience that will end his painful disease but Mike, who is to take Wili to the bioscientists, betrays them to the Peace Authority—the organization that regulates all action on earth and that has banned bioscience in all forms.

Wili escapes with the help of Mike and an agent, Della Lu, sent to infiltrate the Tinkers and to capture Paul. While Wili continues to learn from Paul and to provide some new insights to old problems, the Authority comes to the conclusion that the Tinkers are developing technology dangerous to the Authority's power and will have to be stopped. It is Wili who eventually emerges with the plan that will bring down the Authority and their ability to control the world through their ultimate weapon—the bobbler. The bobbles are a concept of Paul. The bobbles encapsulate anything within set parameters, either above or below ground. The Authority has used them offensively, embobbling anything that poses a threat to the ultimate power of the Authority. The Tinkers, with Paul as their leader, want to put an end to this powerful threat.

With Wili interfaced into a computer system and coordinating with Tinkers around the world, the Authority is soon threatened. Wili is accompanied by Mike who continues to mistrust bioscience but has come to distrust the Authority even more. They are also accompanied by Allison, a military leader from the time prior to the bobbles who has recently been released from a fifty-year term in a bobble herself. Together with Paul, they mount a successful attack that brings down the Authority, then set out to pick up the pieces and to prepare for the time when the Authority, now encapsulated in a bobble of its own, will attempt to return to power.