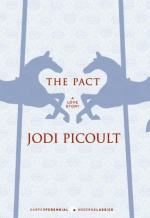 Get The Pact from Amazon.com
View the Study Pack
View the Lesson Plans
Study Guide
Order our The Pact Study Guide

Jodi Picoult
This Study Guide consists of approximately 52 pages of chapter summaries, quotes, character analysis, themes, and more - everything you need to sharpen your knowledge of The Pact.

The Pact Summary & Study Guide includes comprehensive information and analysis to help you understand the book. This study guide contains the following sections:

This detailed literature summary also contains Topics for Discussion and a Free Quiz on The Pact by Jodi Picoult.

The Pact by Jodi Picoult is a heart wrenching story of love and betrayal that will leave readers questioning what they thought they knew of their own morals long after they have returned the book to the shelf. Chris and Emily grow up together, destined to be lovers before they are even old enough to talk. They are closer than siblings, able to feel each other's pain in a way no one else can possibly understand. One night, all of that changes, however, when their parents get the phone call all parents dread. One child is dead. The other is charged with her murder. Two sets of parents will question their own roles in this tragedy, wondering how they could not see it coming, how they could allow it to happen. Everyone will want to point their finger at someone. Where the blame really lies, however, is an answer that will challenge everything these people thought they knew about themselves. The Pact is a story of love as much as it is a tragedy, a story that will keep the reader guessing to the very end.

The Golds and the Hartes have been neighbors for more than seventeen years, ever since Gus and Melanie were both pregnant with their first children. Those children, born within months of one another, grew up together. The Golds and Hartes always thought it would be great if their children, Emily and Chris, were to fall in love and get married one day. Now it seems that this might become a reality as Chris and Emily have been dating for three years. However, just hours after the Golds and Hartes share a meal together, both households get a phone call all parents dread. There has been an accident. The children are injured.

James Harte arrives at the hospital in time to watch his son being assessed by the emergency room doctors. Chris has a large laceration on his head but otherwise appears to be unharmed. In another part of the emergency room, the Golds arrive. They are escorted to a quiet room where they are told their daughter died upon arrival at the hospital. Emily was shot. Thoughts of carjackers or drive-by shootings pass through their minds as they struggle with the news that their only child is dead. The police tell them there was no one else at the carousel where the children were found. It appears to have been a suicide.

Within a day, however, a police detective begins to make waves, suggesting to the Golds that Chris Harte shot their daughter. Melanie Gold grabs on to this information and allows it to swallow her whole, happy to have someone other than herself to blame for this tragedy. Michael Gold is not so sure the sweet young boy who was practically a son to him could have done this. The Hartes also find this idea ludicrous. Their son could never hurt Emily. When Chris tells the police that it was a suicide pact gone wrong, the Hartes find the idea easier to accept, but now are terrified that Chris might try to take his life in the days to come.

It is only a few short days after Emily's funeral that her parents learn the results of the autopsy. It turns out that Emily was pregnant, something neither Michael nor Melanie knew. This information gives the police a motive. The police detective theorizes that Chris killed Emily to keep the baby from interfering with his future. A few days later, on his eighteenth birthday, Chris is arrested. Chris is charged with murder and remanded to the county jail to await his trial. Chris finds it difficult to get along with the other inmates, so he spends as much time alone as possible. At the same time, Chris's lawyer, Jordan McAfee, begins to prepare a defense.

Jordan does not want Chris to tell him what happened the night Emily died. Jordan wants to be able to prepare a defense that has as little to do with truth as possible. Jordan plans to say that the night Emily died, Chris and Emily had intended to die together in a suicide pact. The fact that Chris now claims he was never suicidal keeps Jordan from allowing Chris to testify. However, the longer Chris is in jail, the more he wants to tell the truth. When his cellmate is convicted of killing his infant son and commits suicide in federal prison, Chris becomes desperate to tell the truth to someone. Finally Chris blurts the truth to his mother.

Gus has to testify for Chris the next day and finds it difficult to lie under oath. Chris sees his mother struggle and stops the testimony. Chris insists he must testify, that he needs to tell the world what happened that night. Jordan allows this under protest. Moments into his testimony Chris announces that he shot Emily. Jordan calls a recess in order to learn the truth for the first time in the months he has represented Chris. Jordan puts Chris back on the stand, and Chris tells the jury how Emily begged him for help in committing suicide and how he thought he could stop her if he pretended to go along. However, when Emily refused to back down, Chris left her alone with the gun. When Chris returned, he discovered that Emily could not do it. Chris cannot live with the pain he sees Emily carrying and agrees to help her. Chris holds the gun, but Emily lifts her hand, pulling the trigger with him.

Everyone believes Chris will be found guilty, even Jordan; however, when the jury returns the following day, they return with a not guilty verdict. Chris is allowed to go home. However, the relationship between the Golds and the Hartes is forever shattered. The Golds move out of their house, leaving behind seventeen years of memories.

The Pact from BookRags. (c)2022 BookRags, Inc. All rights reserved.