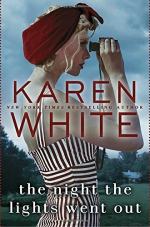 The Night the Lights Went Out Summary & Study Guide

Karen White
This Study Guide consists of approximately 95 pages of chapter summaries, quotes, character analysis, themes, and more - everything you need to sharpen your knowledge of The Night the Lights Went Out.

The Night the Lights Went Out Summary & Study Guide Description

The Night the Lights Went Out Summary & Study Guide includes comprehensive information and analysis to help you understand the book. This study guide contains the following sections:

This detailed literature summary also contains Quotes and a Free Quiz on The Night the Lights Went Out by Karen White.

The following version of the novel was used to create this study guide: White, Karen. The Night the Lights Went Out. Berkley, April 11, 2017.

In the novel The Night the Lights Went Out by Karen White, newly divorced Merilee Talbot Dunlap and her children tried to make new lives for themselves in a new home and new school. Even as Merilee believed she and her family were settling into their new life, an acquaintance from her past was planning revenge on Merilee because Merilee had bullied her during their high school years. At the same time, Merilee had begun to befriend Alice “Sugar” Prescott, her elderly landlady. The two women recognized in each other the signs of resiliency and strength formed by lives filled with tragedy. Each of the women also carried with her a dark secret she hid from the world. As they shared their stories and their secrets, Merilee and Sugar discovered the freedom that comes with confession as well as the healing power of true friendship.

Sugar had not intended to befriend Merilee, her new tenant, but felt she was in a position to help the young family. Soon, Sugar began sharing stories of her own tumultuous childhood with Merilee. Sugar had grown up during the Great Depression. She had witnessed the cruelty of racism when a black man was killed when white children, including Sugar’s brothers, were goofing around on the farm. None of the white children were punished for what happened. Sugar’s mother was distant, Sugar believed that she probably suffered depression, and they never had the mother and daughter relationship she wanted. As Merilee got to know Sugar she realized that she had a good deal in common with Sugar because her life had also been filled with tragedy. Merilee’s brother, David, had drowned when Merilee was only a young teenager. Because Merilee had been in charge of watching her brother, Merilee’s mother blamed her for David’s death. Merilee had spent her teenage years trying to earn her mother’s love and acceptance. Gaining popularity was the only way that Merilee found to earn her mother’s respect so she became captain of the cheerleading squad. Since Merilee became more popular when she bullied an overweight whom she had nicknamed Daisy, Merilee made the girl’s life miserable in an attempt to win her own mother’s love.

In the present, Merilee felt out-of-place among the mothers at her children’s new school. She was one of the few mothers who had to work and was not able to devote her life to her children. Merilee admired Heather Blackwell, one of the mothers who seemed to have her life completely together. Heather and Merilee’s daughters were in the same class and Merilee was pleased when Heather took Merilee under her wing. Heather helped Merilee with her children and even bought her an expensive dress to wear at the school’s fundraiser. All the while, Heather was invading Merilee’s personal life, learning her habits and passwords, and setting up situations with her husband, Daniel, that could later be used against Merilee.

When Merilee found Daniel had drowned in the lake during the school fundraiser, she thought his death was just a terrible accident. Then she learned that Heather was blaming her for Daniel’s death. Also, rumors were circulating about the death of Merilee’s first husband, a story she had told no one about hoping she could leave that tragedy behind her. It was only after Sugar looked at Merilee’s high school yearbook that she realized that the girl Merilee had bullied in high school and called Daisy was actually Heather. Sugar and Merilee’s other friends rallied around her to protect her not only from a physical attack by Heather but also Heather’s claim that Merilee had killed Daniel.

More summaries and resources for teaching or studying The Night the Lights Went Out.

The Night the Lights Went Out from BookRags. (c)2022 BookRags, Inc. All rights reserved.