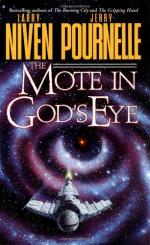 The Mote in God's Eye Summary & Study Guide includes comprehensive information and analysis to help you understand the book. This study guide contains the following sections:

This detailed literature summary also contains Topics for Discussion and a Free Quiz on The Mote in God's Eye by Larry Niven.

The Mote in God's Eye by Larry Niven and Jerry Pournelle is set in the future (beginning 3012 AD) and is about first contact between humans and a very intelligent, highly effective tool-maker race. The story begins by presenting the current state and some history of the human Empire in the galaxies. Faster-than-light travel has allowed humanity to spread across a vast amount of space, encompassing the challenges and benefits of such a change. A series of rebellions are still being handled as a result of an extended, difficult war where many individual planets and systems attempted to secede from the Empire to their own autonomy. The trouble started with the Sauron System, where base human form and genetics were allowed to change more than on other planets. Sauron was interested in creating the ultimate soldier; the resulting wars lasted for hundreds of years and forced many planets to revert to very primitive cultures as a result of isolation and lack of resources from the Empire. As the story begins, the Empire is re-consolidating and rescuing those planets that have been cut off from the rest. The main characters begin their journey on a recently rebellious planet.

An alien spaceship using a light sail to fly at speeds below the speed of light appears in the human system of New Caledonia. The ship has been traveling for at least 135 years. The warship sent from the rebellious system back to New Caledonia for re-fitting and repairs is the closest to intercept the alien ship. The humans capture the pod and the adventure of first contact begins. An alien is found on the pod and the expected dissection and studies begin. In addition, political wrangling, panic, and planning begin. The Viceroy ruling the New Caledonia system, the Emperor's appointed representative, determines that a mission of two ships will be sent to the alien system that sent out the pod. The process to develop communication and some measure of understanding between two completely dissimilar races is involved and has varied results. Both species are wary, protective, and secretive.

Communication is established; understanding, however, remains more distant. One of the warships is invaded by a lower species of the alien system, one of the warships must be destroyed. Three Midshipmen end up lost and hidden on the planet, uncovering the aliens' desperate secrets of uncontrollable population explosion and giving their lives to protect Empire secrets. Three aliens are sent to accompany the remaining human ship and crew back to New Caledonia as ambassadors. They will never return home. During their negotiations, the humans finally decipher the biologically-forced reproduction cycle of the aliens and resulting, consistent, cultural cyclic de-evolution of their planet. The humans are forced to take action limiting the aliens' spread beyond their home system. Difficult choices result and the alien ambassadors choose to help with the process, hoping any time they can purchase for their species through their betrayal creates the possibility for someone to discover a way to change the population-fall cycle.

The plot is designed like a wheel with spokes. The reader experiences a main plot revolving around threats to the Empire that becomes focused on the aliens found in The Mote in God's Eye. Each spoke of the wheel contributes a subplot that is about a specific character or action, and the effect is of each part combining to create movement and tension that drive the overall action forward. The book presents complex ideas and situations; the complex design of the plot reflects this fact and is successfully used to support the complexity that is presented.