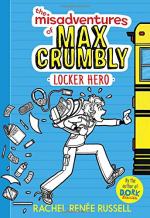 Rachel Renee Russell
This Study Guide consists of approximately 40 pages of chapter summaries, quotes, character analysis, themes, and more - everything you need to sharpen your knowledge of The Misadventures of Max Crumbly 1.

This detailed literature summary also contains Quotes and a Free Quiz on The Misadventures of Max Crumbly 1: Locker Hero by Rachel Renee Russell.

The following version of this book was used to create this study guide: Russell, Rachel Renee. The Misadventures of Max Crumbly 1: Locker Hero. Aladdin Books, an imprint of Simon & Schuster, New York. 2016.

The Misadventures of Max Crumbly 1: Locker Hero, by Rachel Renee Russell, is a comical narrative told from the protagonist’s point of view. It details the trials of a middle school student named Max who was trying to fit in at a new school. Max was scared, and he was prone to panic attacks. Still, he fought his fears until he became the hero his school needed.

Max started attending South Ridge Middle School after being home-schooled by his grandmother. He felt awkward and friendless. Within days of beginning at this new school, he became the favorite target of bully Doug “Thug” Thurston.

All of the action in the book took place in one day. Thug locked Max in his own locker. This gave Max a lot of time to think. He spent the time drawing in his journal and telling the reader about his failed attempts at giving himself super powers, his failed attempts at getting cool clothes to impress kids at his new school, and his weird family. He also introduced readers to his best, and only, friend. He met Brandon at a pet store. Brandon went to a different school, so Max still did not have any friends at South Ridge. Max also took a lot of time discussing how to become a super hero, and what he would do if he was one. He did not realize that he was slowly becoming one.

He had a crush on a girl in school, Erin. She was nice to him, and he was awkward back to her. Thug liked her, too, and that is one of the reasons he was cruel to Max. Erin let Max out of his locker, but he was too embarrassed to tell her that Thug locked him in there.

Erin saw that Max was an artist, because he was drawing a picture of her. She invited him to draw the sets of the school play she was directing. She was also the star in the play. However, he learned that Thug was going to fight him after school, so he decided not to stick around. He felt she deserved an excuse, even if he was lying to her, about why he could not come help. When he arrived, he saw Erin crying but did not know why. He would later learn that the play was cancelled. Still, he had to avoid Thug. He hid in the computer lab, playing a game. When he was leaving, Thug still found him and stuffed him in his locker again, for the second time in one day. This time, though, it was worse. They were going into a three-day weekend and everyone had gone home for the day.

This left Max more time to think about how bad things had become in his life. He was in this situation because he had lied to his parents. He had told them that he was getting along with everyone in school. If he had told the principal or his parents about Thug, things might have been different. He also lied to them about where he was going to be over the weekend. So, they had no reason to realize he was missing.

He got very angry with himself about his mistakes. He decided that he would not put up with Thug any longer. In fact, he would confront bullies everywhere. This was a turning point for Max. He started to think like a hero. Out of rage, he kicked the back of his locker. It gave way, because the wall behind it was rotted. He found himself in an old, forgotten boiler room that had been walled up. No one but him knew about it. He was able to get into the vents from here and explore the entire school.

While exploring, he saw that three burglars had sneaked in to steal the school’s new computers. A cat-and-mouse chase ensued, with Max avoiding the burglars while he tried to call the police. At the same time, he was trying to recover his father’s comic book, which he had misplaced. Before the chase ended, Max had found a super-hero-like costume to wear, and he had Erin as a sidekick monitoring the school’s security cameras from home. She was telling him the burglars' whereabouts. The information did not help, because Max fell out of the vents and right into the middle of the burglars. The book ended on a cliffhanger.

More summaries and resources for teaching or studying The Misadventures of Max Crumbly 1: Locker Hero.