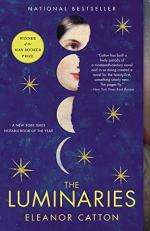 The Luminaries: A Novel Characters

Eleanor Catton
This Study Guide consists of approximately 78 pages of chapter summaries, quotes, character analysis, themes, and more - everything you need to sharpen your knowledge of The Luminaries: A Novel.

Walter Moody has just come to New Zealand from Scotland. He came seeking his father because the man had left his stepmother destitute and Walter’s sense of honor makes him want to rectify the situation. His meeting with his father is horrific and leaves him fearing for his life. He leaves Port Chalmers in a hurry and under a different name so that his father will not be able to find him.

In Hokitika, he stumbles upon the meeting of the twelve men at the Crown. He is taken into their confidence and told the story of the death of Crosbie Wells, the attempted suicide of Anna Wetherell, and the disappearance of Emery Staines. Moody does feel that Carver has done something, yet he sees no conspiracy to link the twelve men together.

Moody is trusted by the group. When the case of Anna Wetherell and...

More summaries and resources for teaching or studying The Luminaries: A Novel.

The Luminaries: A Novel from BookRags. (c)2021 BookRags, Inc. All rights reserved.