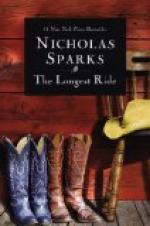 Nicholas Sparks
This Study Guide consists of approximately 32 pages of chapter summaries, quotes, character analysis, themes, and more - everything you need to sharpen your knowledge of The Longest Ride.

Ira Levinson is ninety-one years old and dying of lung cancer. Ira was traveling alone in the dark during a snow storm and missed a curve in the unfamiliar highway. Now Ira is sitting alone in his wrecked car, unable to get out, because he has a broken arm and a concussion. Despite his age and his impending death, Ira wants to survive. Ira also thinks of his dignity, wanting to move into the backseat should he feel death coming so that the paramedics will not have to drag his dead, frozen body out of the front seat. Ira thinks of a story he saw on the Weather Channel in which a man survived more than sixty days after a similar crash. Ira wonders how long he will survive.

Ira is joined by his wife Ruth. Ira knows that Ruth is only...

More summaries and resources for teaching or studying The Longest Ride.