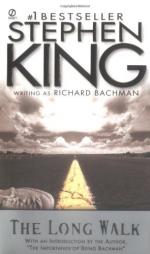 Stephen King
This Study Guide consists of approximately 40 pages of chapter summaries, quotes, character analysis, themes, and more - everything you need to sharpen your knowledge of The Long Walk.

This detailed literature summary also contains Topics for Discussion and a Free Quiz on The Long Walk by Stephen King.

Raymond Davis Garraty arrives in a guarded parking lot with his mother in a blue Ford that looks like "a small tired dog after a hard run." The guard retrieves Garraty's information and permits them to enter. Garraty's mother asks why the guard doesn't return the card and - not for the first time - says she doesn't like it. Garraty is wearing a fatigue jacket against the spring chill. Garraty, watching a guard eat c-rations, thinks again that it's real, that he's really here, and that he's actually among the field of walkers, but for the first time, the thought carries weight.

He's one of a hundred boys, none older than eighteen, who are walking for the Prize - everything his heart desires. The walk is completed when only one walker remains. There is no second prize. All must walk at least four miles per hour. When a walker falls below that speed, he is warned. Thirty seconds later comes a second warning and then a third. The final warning is the ticket - death at the hands of the soldiers who guard the walkers. The Major oversees the beginning and end of the walk and puts in appearances at several points along the way.

Garraty soon connects with several of the boys, including McVries. When McVries is almost eliminated early on, it's Garraty who intervenes and McVries later returns the favor. Though he vows he won't help again, it's McVries who keeps Garraty from running into the crowd to his girlfriend, Jan, a move that would have ended in Garraty's death.

Through the heat of the days, the chill of the nights and the worst rainstorm Mother Nature can dream up, the boys walk, falling off one by one. Many fall victim to leg cramps, hurting feet or simply the inability to continue moving at the pace of four miles per hour. Others go mad with the knowledge that there's no way out and from the thought of those who have already fallen. With no mercy, the soldiers shoot to kill anyone who fails and all must fail eventually - except one.

As they enter the fourth day and the final miles of this particular walk, there are seven left, then three - Garraty, McVries and a loner, named Stebbins, who has shown no signs of weakening. It's only then that Garraty and McVries learn the horrible truth - Stebbins is the Major's illegitimate son. The Major knows of the kinship and Stebbins' heart desire is to be recognized by his father. When McVries can walk no farther, he simply sits, leaving the other two to go on alone. When Garraty realizes that he simply can't go on either, he has the need to tell Stebbins and puts all his last strength into catching up. That's when he realizes that Stebbins is failing as well and he suddenly drops over dead, the soldiers firing into his body as if to be certain. Garraty, with the road now to himself, sees the dark figure ahead and wonders who is there. He thinks back over the field of boys who began the race and knows it must be one of them, but can't be certain which. And when someone touches his shoulder for the second time, he pulls from a reserve he thought long gone and runs to catch up, after all, there are many miles yet to walk.