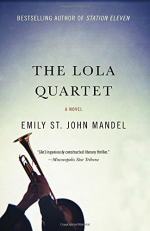 Emily St. John Mandel
This Study Guide consists of approximately 46 pages of chapter summaries, quotes, character analysis, themes, and more - everything you need to sharpen your knowledge of The Lola Quartet.

This detailed literature summary also contains Quotes and a Free Quiz on The Lola Quartet by Emily St. John Mandel.

"The Lola Quartet" is about Gavin Sasaski, a reporter for the New York Star. While working on a story in his home state of Florida, he meets with his sister and learns that he may have fathered a child with his high school girlfriend. When he returns to New York, he is distracted by the possibility of having a child. When he puts his story together, he realizes he forgot to write down the name of one of his sources. After trying to confirm her identity and failing, he makes up a name. This small fabrication leads to others as his newspaper begins to lay off more and more workers. Once his lies are exposed, Gavin loses his job, which eventually leads to losing his apartment as well. He returns to Florida to stay with his sister and becomes preoccupied with tracking down Anna Montgomery, his old high school girlfriend. He struggles to find where she’s gone. He tracks down each of the members of the Lola Quartet, the jazz band Gavin and his friends formed in high school, to locate Anna. Daniel, now a police officer, evades his questions at every turn; Jack, a recovering drug addict on a bender, doesn’t know where she is; and Sasha, her half-sister, is reluctant to reveal her whereabouts as well. What Gavin doesn’t know is that shortly after Anna gave birth she stole over a hundred thousand dollars from a drug dealer in Utah and has been hiding ever since.

Gavin persists in his investigation. He learns that Anna met and ran off with Jack’s college roommate, a jazz guitarist named Liam Deval. When Gavin learns that Deval is staying at a hotel in Sebastian, Florida, he goes to confront him. Deval had a long romance with Anna that eventually fizzled out. When Anna reaches out after a suspicious picture of her daughter Chloe is taken by a real estate agent at Deval’s mother’s house, Deval returns to Florida to help protect Anna and Chloe. When Gavin shows up at the hotel, Deval panics. After failing to reach anyone who can confirm that Gavin isn’t affiliated with Paul, Deval expects the worst: that Paul, the drug dealer has finally caught up with them. Deval shoots Gavin in the arm and when Gavin wakes up in the hospital Daniel is forced into explaining more about what happened to Anna. Daniel stops short of revealing where Anna is, but confirms that Anna is in trouble and in hiding. Once Gavin tracks down Sasha, he becomes unwittingly involved in the plan to free Anna from her debt to Paul. After a misunderstanding, Paul ends up dead, leaving Gavin and Sasha to question how they became involved. When Gavin finally confronts Anna about what she’s done, he realizes how misguided her choices are. He tells Sasha to make a run for it and decides that his only option is to tell the police what happened. When he arrives at the police precinct, he struggles with whether or not he’s made the right decision.

More summaries and resources for teaching or studying The Lola Quartet.