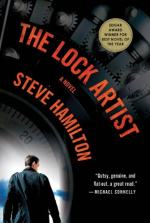 Steve Hamilton
This Study Guide consists of approximately 63 pages of chapter summaries, quotes, character analysis, themes, and more - everything you need to sharpen your knowledge of The Lock Artist.

The Lock Artist: A Novel Summary & Study Guide includes comprehensive information and analysis to help you understand the book. This study guide contains the following sections:

This detailed literature summary also contains Topics for Discussion and a Free Quiz on The Lock Artist: A Novel by Steve Hamilton.

The Lock Artist by Steve Hamilton is an intriguing story about a silent young man who is led into a life of crime because of his amazing ability to open locks. Years after a family tragedy steals his speech at the age of 8, Mike discovers his talent at picking locks, but when his gift comes to the attention of the wrong people, Mike loses everything. The Lock Artist is a sympathetic tale which shows the devastating effects of a childhood trauma on the narrator.

While incarcerated, Mike decides to write his story since he has not spoken since he was 8 years old. After robbing a safe in Pennsylvania for the Blue Crew, Mike goes to New York in 1999. After the tragedy in 1990, Mike goes to live with Uncle Lito in Milford, Michigan. Back in 1999, he steals diamonds from a house in Connecticut with a group of amateurs, but they alert him that there is a problem the next day. Mike attends school at the Higgins Institute for those with communicative problems, and the summer before he is sent to public school, he learns to pick locks. Because the diamonds were fake, Mike returns to Connecticut with the amateurs to find the real safe, but the amateurs are killed, and the security officers handcuff Mike. At Milford High School, Mike learns that he is artistically gifted, but he makes a mistake by opening Brian Hauser's gym lock. Mike escapes from the handcuffs in Connecticut and returns to his apartment in New York to find the white pager beeping. When Brian and his buddies convince Mike to break into the Marshes' house to play a prank, only Mike is caught and arrested.

After meeting the White Crew in Los Angeles, Mike proves to them that he can open a safe. Mike does not reveal his accomplices to the judge when he is tried for breaking into the Marshes' house, so he is sentenced to work during the summer for Mr. Marsh who makes him dig a pool because Mike still will not reveal his accomplices. While Gunnar waits in the mark's house, Mike accompanies Julian, Ramona and Lucy to a nightclub where they assure the mark, Wesley, is at his club. Then, Mike and Lucy leave to rejoin Gunnar. Amelia confronts Mike while he digs in the Marshes' backyard, accusing him of being able to talk. Mr. Marsh and a locksmith make Mike unlock the Marshes' backdoor, and that night, Mike draws a portrait of Amelia and plans to give it to her. At Wesley's house, Mike and Gunnar rob the safe and manage to sneak past the multiple alarms to rejoin Lucy outside and return to the club. After failing to open a lock with serrated pins at the Marshes the next day, Mike's day worsens when he sees Amelia and her friends drawing him. He buries the portrait in the pile of dirt, but that night, he retrieves the portrait, breaks into the Marshes' house and leaves the portrait on Amelia's dresser. Since she does not tell her father, he draws a comic strip portraying their first meeting the next night, and he and Amelia begin exchanging comic strips as a means of communicating.

Mike feels connected to the White Crew after the first job, and he moves into the apartment attached to their garage. The day after Mike sneaks into the Marshes' house to make love to Amelia, Mr. Marsh decides Mike should spend his time doing art with Amelia instead of digging. He insinuates there is another stipulation, but Mike is only concerned with the fact that Mr. Marsh is now encouraging him to spend time with Amelia. While in California, Mike receives a page from Harrington Banks, an FBI agent he once met at West Side Recovery, who tries to convince Mike to turn himself in, but Mike disconnects the call. Mr. Marsh convinces Mike to demonstrate his lock-picking talents for his partner, Mr. Slade, and the men are convinced Mike can help them. After being returned by the men who kidnap him, Mr. Marsh sends Mike to the Ghost in Detroit to help him pay off his debt to the man from Detroit by learning to open safes, but Mike is unsuccessful. Gunnar tries to convince Mike to plan a heist on the man from Detroit, and Mike refuses because such a plan is suicide. The red pager goes off. The man from Detroit sends Mike back to the Ghost to try opening safes again, and Mike is diligent in his practice because it is the only way for Amelia to come home. After witnessing Sleepy Eyes kill the assemblyman and his two partners in Ohio, Mike travels to Michigan since it may be his last chance to go home. Mike continues practicing with the Ghost until he is successful.

In Michigan, Mike steals Banks' cell phone from his uncle's kitchen. He visits Amelia at the University of Michigan, and when she insists on knowing what happened to make him this way, he takes her to his childhood home on Victoria Street and draws the horrific scene of his father killing his mother and her boyfriend and trying to kill Mike when he was 8 years old. Mike continues practicing at West Side Recovery after Amelia returns home. He passes the man from Detroit's test to prove his loyalty, and when he receives a job on the blue pager, he leaves a diamond ring on Amelia's pillow before heading to Pennsylvania. Mike and the White Crew plan to rob the man from Detroit's boat, and though they are successful, Gunnar sets them up; he plots with Sleepy Eyes to kill the man from Detroit and the rest of the White Crew. Mike phones Banks when he finds Julian and Ramona dead, and after Sleepy Eyes kills Gunnar, Mike opens the White Crew's safe, and Banks arrives just in time to prevent Sleepy Eyes from killing Mike. Back at the prison, Mike has spent 10 years in jail so far, but he hopes he will be released soon. He writes to Amelia and is sure he will speak again when they are finally reunited.

More summaries and resources for teaching or studying The Lock Artist: A Novel.

The Lock Artist: A Novel from BookRags. (c)2022 BookRags, Inc. All rights reserved.